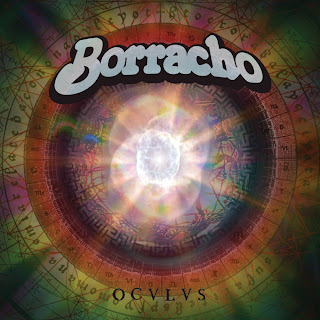 Borracho is a band that makes excellent drinking music. Ofcourse that shouldn't come as a surprise keeping in mind the band's name (which means drunkard), but this time the band really lives up to it's name. Expect a bunch of heavy dirty stoner rock.
Oculus is one of those records that are here for one thing: to make you go wild. Especially after a few drinks, and then have another few. Thereafter a few more Borracho songs, and then more booze. You want to have about as much as you can handle, and then some. Borracho go, and go hard. Their music isn't necessarily deep or any food for thought, but it does what it wants to do and is very effective. It's party music; dirty, heavy, fun and best played loud.
For a band that started out as a side project Borracho have put out quite a few albums since 2008, Oculus being their 6th. That shows Borracho has become quite a serious hobby of theirs, and that can be heard. They've improved lots since I first heard of them on their second album Splitting Sky. Back then they were playing heavy rock too, but their way of playing together has grown a lot smoother. Every member seems to know better what the band is doing, and giving the band their all. And still have a lot of fun. Borracho has become more powerful while not becoming more serious, which is something I can really dig.
So, if you're in for some fun listen to Borracho. Their full album will be out tomorrow and then all of it will be streaming over at their Bandcamp, but for now the link to the stream will have to do. They give it away for not a whole lot of money (beer money not included), so just hand 'em over €5 and you'll be enjoying life a bit more.
~Ruben

For Fans Of; Wo Fat, Fu Manchu, Planet Of Zeus, Truckfighters, Gonzalez