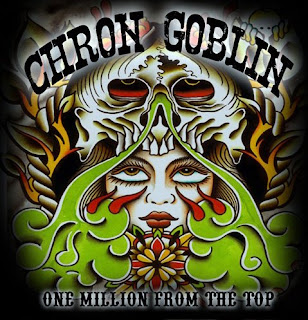 I'll admit it, when I first hit play on Chron Goblin's One Million From The Top, I wasn't sold...
No, no, maybe thats a little strong. Hmmm, maybe just a little blindsided...? It wasn't exactly what I was expecting from the outset. I'm not sure why, but that being said they very quickly won me over. Their off kilter harmonic, relentless party beat and unorthodox yet nicely subtle slant on whats probably closest to southern rock without actually being desert rock is amazingly charming. But what else would you expect from four Canadians? They're all bloody awesome. At least those I've met. Including the toothless one's trying to kill me on the ice. Salt of the earth kinda people.
But anyway, back on track. Like I was saying, these guys really exude that high octane party sort of vibe, like an early Refused, but trading in some of that punky off beat style for more of a riff based approach. This is where their understated southern rock side really shines through, well, that coupled with a touch of desert rock and a slight smattering of post hardcore. It's boast a great selection of licks that really manage to breath a nice breath of fresh air into the whole style. Sort of clashing post punk with some of Nola's finest offerings. It's a strange mix on the face of it I grant you, and it's rarely something that would be up my street, but it all gels together so bloody well that it's nigh on impossible not to love. Like Russia's Grand Astoria there's everything you could possibly ask for there in droves; catching riffs, great vocals and a beat that will just hypnotise your feet into stomping along. I can't be the only one that thinks so either because the guys haven't just being the only Canadian band to play London's Desertfest but they've also supported the likes of 3 Inches Of Blood, Devin Townsend and the mighty Weedeater! Not too shabby eh? But they're not resting on their laurels, oh no, they'll be hitting Canada's west coast for a tour in late September and have a brand spanking new album in the works, titled Life For The Living, which will drop just prior, on September 15th.
~ Jay


For Fans Of; Refused, The Grand Astoria, Winnebago Deal, Beef Supreme, No Fuzz