Leading The Puig To The Slaughter... 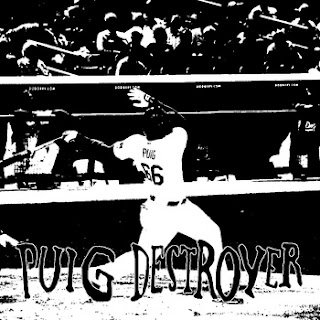 Seeing as Tim Lambesis' murder-for-hire plot may put joke metal outfit Austrian Death Machine's third release on hold for a while, I present to you the epitome of grindcore at its hardest: Puig Destroyer. While I understand baseball isn't everyone's cup of tea, you have to sort of wonder how well a dude can swing a bat and knock some out of the park in order for a band to take your last name and mash it up with Pig Destroyer. Sports fan or not, Puig Destroyer's recently released EP pays all sort of homage to the Los Angeles Dodgers rookie outfielder Yasiel Puig while maintaining a blistering pace that will you leave you reeling.
Consisting of Thrice drummer Riley Breckenridge, ex-Curl Up and Die vocalist Mike Minnick and Kowloon Walled City's guitarist Jon Howell and bassist Ian Miller, Puig Destroyer does their best to shatter your eardrums in record time while showcasing the truly "metal-as-fuck" side of Major League Baseball. Although Breckenridge sticks to the skins in the band, his backing vocals are a strong supporting act to those of Minnick, often generating a sound akin to two lions fighting over a zebra carcass. The rest of the effort is solid as well, with Howell and Miller thrashing right along, spitting their sunflower seeds and popping their bubblegum.
While no one track lasts longer than around a minute, the album shows promise as to where the band could form a fully listenable effort, even if the material may only appeal to those who happen to both embrace the majesties of grindcore and professional baseball. That being said, I can't help but completely hop onboard with this latest "tribute" band from the metal world.
As one would expect, such an endeavor has not escaped the greatness of colored vinyl pressing. Pre-orders are up now at The Ghost Is Clear Records, including a standard pressing on black or a special edition on split blue and white featuring the L.A. Dodgers insignia. If you're not totally convinced, hop on over to PD's Bandcamp and check out the entire EP for any price you'd like.
~Joe