Ask Me No Questions... 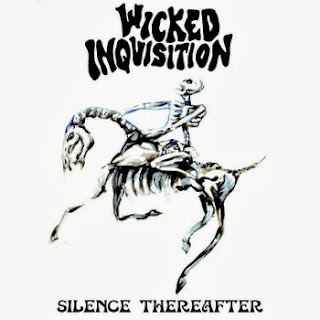 As fall sweeps across the U.S., I am looking forward to some more stoner grooves to keep me warm through the treacherous winter ahead. The first of its kind has found its way to us this week in the form of Minneapolis, Minnesota quartet Wicked Inquisition, a blues/stoner hybrid rocking a solid 4-song EP that grooves and hits hard in all the right places.
Pulling a lot of inspiration from the classic rock and metal sound of the 1970's, Wicked Inquisition impress on the well-mastered album, showing chops in a sound that is rather common today and could easily get passed up given the copious amounts of bands producing similar material. Along with clean solos and genuinely fun instrumentation, the band's frontman Nate Towle's croons stand out as the highlight of the group. Equipped with a classic vocal range akin to Black Sabbath or Dokken, Towle sings forth every word with such bravado that every syllable grabs the listener as though they are the most important words ever spoken by a man.
On opening track "The Jester's Clown," the band jumps into a pure rock sound interspersed with great riffs and fast breaks that lend openings to a plethora of solos and note delays that work on so many levels. Similar structures are seen on "Brainstorm" and "Radius Of Fear," each switching it up slightly with harder guitar rhythms and faster drumming. Instrumental "Blue Nightshade" serves as a nice mid-album track, showcasing the band's musical talents and affinity for moody, atmospheric classic rock.
If you're looking to slow it down a little lately and listen to something not so murder-inducing for those cooped-up, chilly nights, look no further.
~Joe