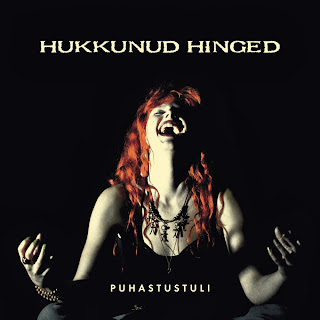 Straight out of Estonia, Hukkunud Hinged have arrived with their new album, Puhastustuli, a hard-rocking cluster of toothy riffs, talented drumming, and a good sense of song structure. If you're not fluent in Estonian, you'll be out of the loop on the lyrics, but the two vocalists (Janek and Katrina) do a fine job of getting their emotional state across even for those who can't make out the words.  There's an enjoyable variety to the songs, from the cold open of creeping instrumental atmospherics with “Põhjast Lõunasse” into the semi-psychedelic hard rock of “Nullpunktis,” then right on into a spine-tinglingly deep doom groove in “Inimeseks Kõlbmatu.” And that's just the first three songs of the album; the rest of it moves about with plenty of flexibility, showing off influences from blues rock, fuzzy psychedelia, hard doom metal, desert rock, and more, all with the pride and joy of a band that's spread its wings and is ready to fly off into their own adventure. They're self-releasing the album, so if you like what you hear, swing by and help them out by picking up a copy!
~ Gabriel

For Fans Of; Necronomicon (Brazil), Pentagram, Blue Cheer, Jess and the Ancient Ones, Valkyrie