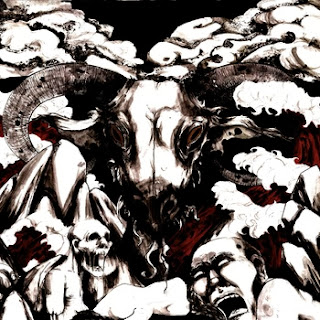 Don't clean out your ears, that's just the hum and fuzz blasting off of Blood Red Water's guitars. Finding their way to our emails once again, Blood Red Water are back with their sophomore effort, All The Ills Of Mankind, which seems to encapsulate the best parts of their earlier work without sounding too redundant. More and more, Italy is finding itself at the forefront of the sludge movement these days, and Blood Red Water is quickly claiming their stake as kings of the scene.
On their second album, the band sticks to a similar vocal structure, stressing growls and barks spliced with animalistic force that really gets the message across: this band is tough as nails. Musically, cleanliness has gone right out the window, which is for the better. From start to finish, All The Ills Of Mankind, is a mix of reverb and distortion, blips and pops that generate a dark atmosphere and hold a heavier tone than the more bluesy, stoner sound the band once presented.
Opening track "A Ride In The Funhouse" starts out a little sluggish, but, once it gets going, there is no stopping the ferocity. Drop chords boom and dirty drums crash forth over and over, unrelenting yet surprisingly rhythmic given the nature of the music. Strained vocals and a mild guitar slide round out the track and lead the album into the slower, methodical sound that serves as the more common element throughout the remainder of the effort.
The meat of the record is perhaps the most fun part of the listening experience, even seeing an audio sample from the film Mulholland Drive (a David Lynch joint that is weirder than shit), and a bit more peddle effect and string arrangement experimentation. "The Outstanding Loss" and "Bad Trip In A Toxic Mind" are placed back-to-back perfectly, creating the strongest 11 minutes of the album. Full of muscle and passion, both tracks stand out as the true highlights.
With no sign of slowing down anytime soon, Blood Red Water is sure to keep fans of sludge well-stocked for the foreseeable future. Here's hoping it will be even more fantastic than what we'v eheard so far.
~Joe