The Winds Of Change... 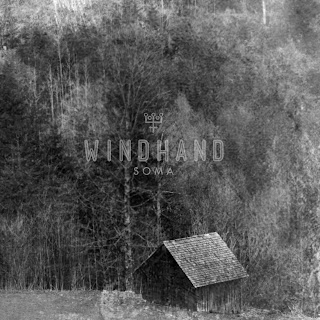 Yeah, we usually kinda shy away from whacking up major releases, so you can excuse the tardiness of this review. But it is for a good reason... Mainly because it results in a major pain in our ass. If we're not getting our shit taken down by Rise Above Records then we've gone and rubbed someone up the wrong way. Besides, we get sent so much from bands that actually need our help and support, it's more than enough to keep us busy. That being said, I am now going to throw caution to the wind (no pun intended) and address the pretty significant buzz around Windhand's second studio offering, Soma. I'm not one for just leaping on the bandwagon, but fuck it, here we go.
Now, I'm a big fan of the first record. I was over the other side of the globe when it was released but managed to grab a black first pressing, then later lucked out to find and subsequently stump up a pretty penny for the purple first press. Meh, what can I say, I'm a sucker. So much so, that when good ol' Steve over at STB Records dropped me a line (while I was on holiday in Spain) to tell me the pre-order for Soma had gone up, I actually paid 12 fucking euros for internet access to order it. As you can imagine, that went down like a lead balloon with my Mrs. As a result it did give me pause for thought, mostly thoughts along the lines of; "these bastards better knock out something bloody good, I'm in the dog house now." Well, to prematurely blow my wad, as it were, yeah they did pretty well...
The first thing you'll notice is the production. It's not not been ramped up and polished to be over the top. Hell, its not like comparing Sabbath's 13 to Paranoid here, thank god. But it doe's have that certain something that says, 'yeah, we got a nice big cheque from Relapse'. Not that I'm saying that's what happened, before y'all freak out. I'm just saying there's been more attention to detail and tidying up than the first outing. Sure, that sounds like a good thing on the face of it, and in most cases it is. But that first album had a certain chemistry, a sort of fuzzy dirtiness that gives a real character to recordings of this ilk. This is why 'those difficult second albums' are just that. The first release goes down a storm, the band receive a metric shit ton of praise and fandom, and inevitably the follow up gets a boat load more cash pumped into it. This seldom works in the band's favour. Although that being said, fortunately Windhand's second (if you're not including their split EP with Cough) foray into the studio didn't result in over indulgence. For the the best part. They've retained all that feedback addled melancholic atmosphere from the self titled release but just honed and refined their game some what. For the better? Well, that would ultimately be determined by your own taste. A part large part of me is still undecided, despite having listened to the album for the last month or so. I guess time will tell on that front. Eventually. Or until I go to catch them in Leicester next month (and again in Birmingham, hopefully). As the real testament is often how the tracks are received live. Something I'm a little dubious about when it comes to the final track Boleskine. Racking up a mind boggling track time of 30:30, if one too many tokes are taken pre show while the set list is being scrawled up and it's decided to add it to the set I imagine I'll be able to sulk off to do my tax returns or something and still be back in time to catch the final, albeit crushing, riffs. Maybe I need to be put on a dose of Ritalin, I don't know, but I just can't really hack that kind of length when it comes to song. I max out around the 12 minute mark then my mind just starts to wonder around dangerous territory. Last year I went to see Red Sparowes, and although they were good live, it dragged and I began to ponder about shit like, "I bet I could throw my shoe and knock that water bottle off his keyboard" and "that guy's hair in front looks well flammable...". See what I mean? So if you go to see them playing sometime in November and at some point someone in the audience appears to spontaneously combust, then look behind him for the irritable guy with a zippo. That'll be me.
Nonetheless, Soma is an absolute cracking piece of work, I honestly can't deny it that accolade, and in all honesty it would be more than deserving to stand shoulder to shoulder with the likes of stoner rock behemoths such as Sleep or Acid King. Dark, fuzzy, somber, haunting and powerfully demonstrative, Soma ticks all the boxes. Go get it.
~ Jay