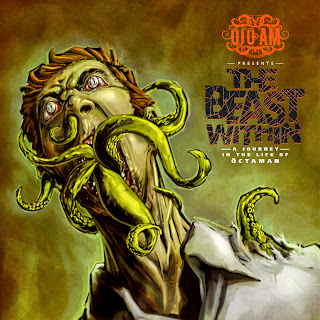 This has been wallowing away in the depths of my iTunes for two years, and I have genuinely no idea where I acquired the thing from. But this instrumental fuzzy little gem is not entirely the focus of todays post. The main story actually involved old friends Lihius, who we covered last year. See, the guys have decided to join forces and have laid down plans to press a split 10", and being as they share two members in the forms of Guillaume (drums) and Antoine (guitars), it really does make sense. All the plans, details and most importantly, rewards can all be found here. Oh, and I forgot to mention, they're getting Godmachine to do the artwork. Seriously, you need to check this guys work out. Mind. Blowing!
So head on over, part with a few bucks and get some really cool shit in the process! But while you're waiting on the vinyl go give your ears a treat and pick up both The Beast Within and Lahius for low low price of absolutely nothing!
Score!
~ Jay