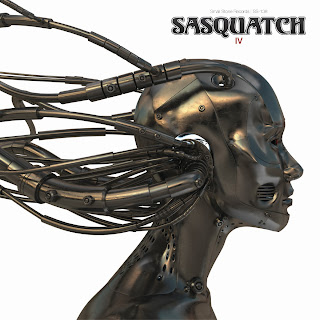 On their fourth album (appropriately titled IV), Sasquatch aren't shy in the least about exposing their fondness for older rock and roll along with the stylings of newer hard rock. Fuzzy guitar licks with hints of blues merge with power-chord outlines for something that evokes the post-grunge desert rock of the mid-to-late '90s, or a trimmer, more concise version of flat-out swamp rock. After the comparatively straight-laced introduction by the first pair of songs, The Message and Eye Of The Storm, Sasquatch seems to loosen up and feel more at ease with unfurling the psychedelic tendencies; Sweet Lady features some positively Hendrix-like guitar expression that savours the notes even as it shreds them to pieces, with the vocals worked into the low-end for great effect. Smoke Signal, a later track, takes the psychedelic freak-out even further, with rolling drums and crazed guitar feedback that builds and builds until it seems to be riding itself in a circle. The guitar keeps finding more opportunities to let loose through the rest of the album, which makes it almost disappointing when they seem to sober back up as they bring the album to a close. But that's just to leave room for the seven minutes of the last song, Drawing Flies, which starts out slow but works up to a locomotive-like chugging as it heads towards the sunset, making for a perfect end to a solid album. With some memorable riffing and great interplay from the band-members, IV leaves a sizeable footprint from the mighty Sasquatch. Recommended!
There doesn't appear to be any plans to follow in the footprints of their earlier work and get this out on vinyl, at the moment at a least. But keep checking our friends over at Small Stone Records, because I'm sure they'll be getting around to it at some point...
~ Gabriel