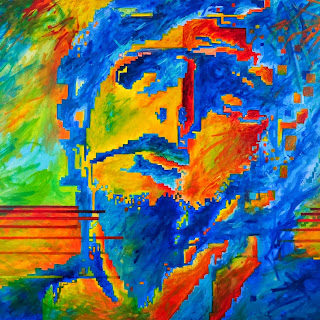 As leaves drop and the air takes on that East Coast fall smell it is nice to be graced with an intriguing soundtrack to accompany the sensory onslaught of a Dayton, OH autumn evening. And it is my fortune to have A Separate/Divide by Liquid Casing from a much warmer (I'd imagine) Houston, TX on my review list.
The record opens with the almost Queens Of The Stone Age feeling A Path Of Footprints Forged in the Midnight Sun. The dynamic shifts on this record are unlike anything I have heard in anything since Frank Zappa, especially with the addition of Sax which in many ways really separates the band's sound and feel from many. There is overall some flat out brilliant layering and mood setting that takes place through out the record's entirety. Checkpoints & Borders stands out as a very passionate and almost symphonic piece that brings in a talented vocal display that is different from the rest of the records tracks but a very well done and welcome change! The closing track Riot Path has some nice electric piano under a mesmerising guitar line that keeps you in its web as it drifts in crowing closer and closer to climax that doesn't disappoint! The piano is placed brilliantly with in the song's groove! This is a record that even after several listens I feel I would still hear something new each time. It is a rare but beautiful thing to still be able to find a band that you can put a record on and close your eyes and kinda of just go on a journey and these guys have that! This being my first time hearing Liquid Casing and my first review on this blog I'd like to close by saying I am now a fan of this band's work & look forward to hearing more from them & being apart of the Ride With The Devil Blog crew!
~ Stephen