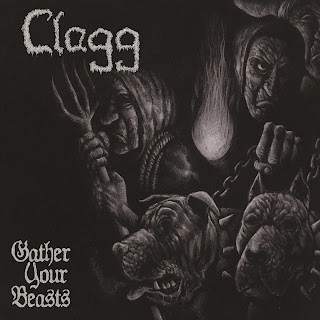 From the sun-baked landscape of Australia comes the resolutely sludgy fourth album from Clagg, Gather Your Beasts. From the first sight of the cover art, attack dogs held back by suspicious villagers, it's clear that there's doom afoot. Once the music hits, Clagg make it clear that they intend to deliver on that, with an extra helping to make sure that no one leaves feeling unfilled. There's five tracks on the new album, and the first of these, Five Curses, is a ten-minute-plus excursion into thick rumbles of bass, drums that seem ready to signal a war party, and a nasty growl from the vocalist that'll make your own throat hurt just to hear it. It does a great job setting the stage for the other four songs, which include the title track, which rides in on a riff that sounds ready to go for the throat, and just gets meaner and harsher from there (though there is a calmer bridge about six minutes in, for breathing room, before it swings back into ripping mode). Then it's into The Great Mortality, which starts off with a bluesy riff that gets heads bobbing before unleashing havoc with wailing feedback and crushing rhythms, and gradually shifting into a slow groove of doom (imagine the audio equivalent of walking into a tar pit). The Dream Is Dead signals a time for brooding on the album's inevitable end, but instead of letting themselves sink deeper, they summon up some energy to fight their way out, and kick anything in reach in the process as it howls out to the end. Finally, Pathways To Oblivion makes good on its name by ushering the album off of its coil in fine fashion by dissolving into a slick psychedelic fuzz. Truly great stuff, grab a copy to find out for yourself once it hits the stores.
~ Gabriel