Make No Mistake About That Noise You're Hearing... 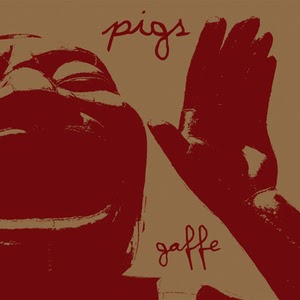 One of the most vivid memories I have of first hearing really loud, fast rock was the first time I saw UNSANE's music video for the song "Scrape." The video is little more than a few short clips of the band playing the song mixed in with clips of skateboarders eating shit and getting annihilated by handrails, but it's always the rhythm in that song that takes me back to the noise rock sound that has become such a driving force in influential rock and metal acts that are still around today. Keeping that sound alive (in arguably its best form) is PIGS, a three-piece consisting of UNSANE bassist David Curran (handling guitars on this project), drummer Jim Paradise (Player's Club, Freshkills, Hellno) and Slughog bassist Andrew Schneider (also a noted producer for Cave In, Converge, Keelhaul, etc.). Following up their 2012 full-length, "You Ruin Everything," PIGS has created a ballsy and gritty EP full of sludgy bass lines and raw guitars that pay homage to each members' past endeavors, but drive the noise rock sound with such passion that you would be hard-pressed to find an equal.
Interestingly enough, Gaffe consists of three tracks that all present a similar sound, but also seem to each possess different speeds to make for a diverse record full of welcome surprises. Downright dirty and loud, the EP's title track transitions quickly from a bass-heavy crush to buzzing guitar, all backed by raspy, barking vocals, which maintain a tough exterior, even when venturing into sing-song territory. On "Elo Kiddies," the band presents more of a structured style with a catchy chorus and group chants that don't necessarily spark the idea of gang vocals, but, rather, a larger band presence (think group vocal transitioning like that of Dropkick Murphys). Slowing way down on "If I'm In Luck," the band rounds out the effort with a doom-esque goodness that really lends itself to the talented guitar work displayed on the album. Vocal effects also venture into the spotlight here, creating a spacey vibe, but one that adds to the atmospheric feel of the finale.
Having warmed up a little here in the states with select shows in the New York area, PIGS are currently tearing it up in Europe through early November. Dates for that can be found over at the band's website pigsnyc.com. Those interested in the vinyl version of the EP will be happy to know it comes in a solid red and can be purchased over at Solar Flare Records for our European friends and Robotic Empire Records for those of us stateside.
~Joe