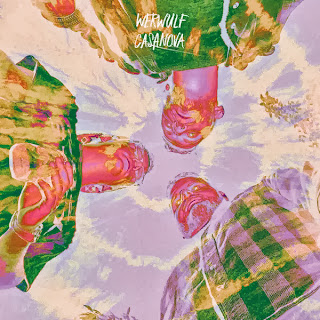 In film there are great moments of group strutting, think the group scene from Reservoir Dogs where Mr. Pink and Company are walking into the bank then swap the original sound track with Casanova or "Prowlin" by the Memphis,TN outfit Werwulf which has dropped just in time for the fitting Halloween season. This 2 song EP is short & sweet but leaves nothing lacking. High energy garage rock reminiscent of The Eagles Of Death Metal and a hint of Iggy Pop WerWulf was oddly born from more metal roots featuring members of Memphis based Heavy Eyes and honestly sounding nothing like them or even remotely touching on metal at all. Memphis doesn't seem like to me a place that is known for rock or metal of any sort however I was certainly corrected and left wanting to know more about the Memphis scene. All in all Werwulf proves thinking outside of the box is a good thing and often times exactly whats missing from the rock genre. There is far too much of the "I'm only into ____ style music" going around & its pleasant to hear some genuine diversity and bravery for a lack of a better term!
~ Stephen


For Fans Of; The Datsuns, The Subways, The Black Keys, Hanni El Khatib, Kram