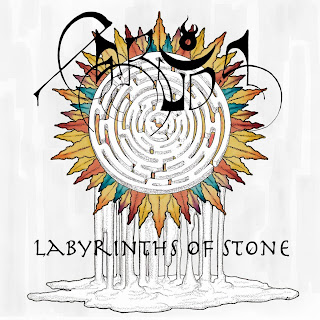 Let me introduce you to a little 4 piece from Spain, and it's definitely in the heavy category. They call it stoner-sludge rock (not something I've ever seen put together quite like that), but that's exactly what it is, inside of a single song it can go from crushing sludge to a stoner rock riff-o-rama, so you can imagine how this EP bends and meanders through the two similar, but different styles. It might also make an interesting note that the man Billy Anderson (the engineer and mixer behind the original Dopesmoker album for Sleep) mixed and mastered this little guy. First up is "Labyrinths of Stone", the title track, and it's what's a title track should be, from start to end it'll give you a good idea of what's ahead. It starts off as a heavy as shit Sludge track, and then gets confused and goes into stoner rock mode after a few minutes, and pretty well gets stuck there, somewhere between the likes of Crowbar and Fu Manchu, just getting kicked around (and the same could pretty much be said for the entire EP). After that is Colossus, and certain parts of this conjures up images of just that, some stone colossus treading it's way across a green landscape, and completely flattening and destroying everything in it's path. The next song tends to stick to the stoner rock side of things a bit more, but the Sludge is there, just not quite front and center as the first two tracks, for Charm and Fall, the singer even loses a little of that gravel in his voice for a few parts, this one is a lot more drawn out, spacey and melodic, than the first two though, this is probably "the" stoner rock song on the EP. The next one, it starts out real "twangy", almost like an electrified folk song, but after about a minute, a sludge riff drops, and all is changed forever. I'm always a fan of a good closing track, it's the last song, it should make that kind of statement. This one doesn't fail to disappoint, Ooze is hard and heavy, and will leave with a grin on your face when it's all over. If you dig it, then go check them out on their bandcamp, it's a name your price deal, but this is definitely worth throwing the band a few bucks. And if you're a vinyl person, check out their label NoizeLand Records. If you like the group Louded, they have the vinyl for Satanic Boogie Woogie, which was reviewed here previously.
~ Skip