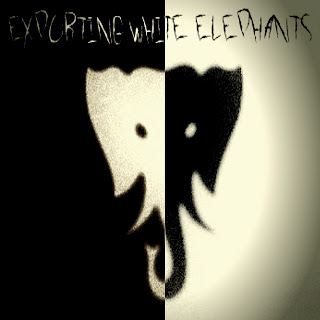 Exporting White Elephants, what a name, but don't let the name mislead you either, some of these songs are almost that heavy. This is a two piece band from Santiago, Chile, with Tomas Frothingham on bass and vocal duties, and Tomas Sanchez on drums. Now when I think of two piece groups, Om is usually one of the first to come to mind, this would be Om's Stoner Rock love child if there ever was one. It doesn't take one long to start finding things to love about this album, from the different bass tones that change on a dime, to some of the rocking jam sequences, to how the vocals take on a very strong Blues sound, but can fade to Grunge screams throughout the tracks. They list some of their influences as "grunge, stoner rock, classic rock, psychedelic, heavy metal", and you have to be blind to not see every one of these well represented somewhere on the album, maybe even a couple well executed examples of their influences in the span of two or three minutes on a single track. I believe out of the whole thing, the stand out track for me was "Hey Papo", it's a fine example of Blues tinged Heavy Rock, and how well the two can co-exist beautifully in one song (and without a guitar in sight no less). It's just something about that heavy Blues sound of this song, I loved it immediately. Another one of the tracks I enjoyed immensly was "Nasty Lips", a good ole' fashioned, Stoner Rock song reminiscent of bands like Gas Giant or Mongrel. Those Bluesy vocals are great, this time with a clean(ish) bass line, and some straight forward, toe tapping, drum playing that anyone can appreciate. The following track "Koukeing" shows off some of their Seattle prowess, as it opens up from a cool solo drum beat to a full on a Grunge-fest, even reminding me of older Seether in places. This one is in fuzzy overdrive from beginning to end, and it doesn't let up. I've never seen these guys a day in my life, but when I listen I can almost picture two Chilean guys in a garage somewhere playing loud as hell, and one of two things happening: they either piss off the entire neighborhood, or end up with an impromptu house party, and if either one happens, you know you're doing something right. At the end, these are some straight forward guys when it comes to their music, no frills, nothing special to throw on top, just great, viscieral, Stoner Rock, the whole album is a good listen.
~ Skip