In The Shade Of The Swarm... 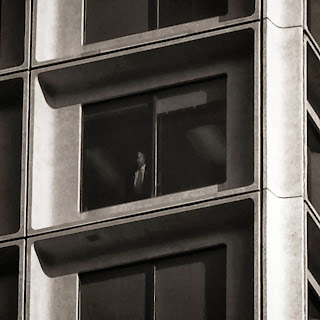 I know it's Saturday and it should be a news day, but bollocks to that, it can go up tomorrow, this is far more important. I had to break convention and make an exception today, because, quite frankly, one of my favourite bands I've discovered over the last few years have just released their brand spanking new album.
To say I've been eagerly waiting for these bastards to get into the studio and knock out a new album would be a massive understatement. Since stumbling upon this Canadian trio just over a year ago their self titled debut has seldom left my iTunes playlist. It had everything I could ever have possible asked for; groove, anger, fuzz, balls, fuzzy balls(?) and pure genius song titles, such as; Ham Smuggler Vs. The Vegan and Thunder Chunky. It crushed. It's just that simple.
So having longed for a new album for so long I'd naturally build it all up in my head. Obviously I don't have to address the ins and outs of this rookie mistake and cliché pitfall. I hadn't really given the alternative much thought until hearing the guys where heading into the studio for a second time. In fact, the option of crushing heartbreak only dawned upon me about 30 minutes ago when Jay hit me up to tell me it had just gone live. Trepidation welled up for all of about 10 seconds, until I read the track list and noticed the opening song; Shoot First, Ask Christian Slater. That set me at ease, and just like that I knew everything was going to be alright. You can't possibly have a title like that, or Fuck You And The Fixed Gear You Rode In On and not cement its awesomeness in barrage of churning argo fuzz and beautifully catchy sludge based riffage? As it turns out.... No, no you can't. How could I ever possibly have doubted them? Right from the opening yawn of feedback you're grabbed by the nuts and held in for the duration. As the album churns onwards it meanders and throws curve balls at you from all angles. Beginning with a slow typical sludge tone and pace it rumbles along, then a little under a minute into Get Some Or Run Some, without warning, it erupts like bulldozer hit with a burst of nitros. It's a formula that worked on the first album and it still works now, to devastating effect. Where a good sludge track will get your head bobbing a good stoner rock track will get your foot stomping, Well Invest In Your Death will have you going hell for leather at both. Not at the same time, obviously. It wont leave you looking like a stroke victim. It's a remarkable collaborations of genres though. The ethos of grindcore, a mix of sludge tone and stoner rock fury and a slightly punk approach.
It's up to download for a price of your choosing, but as always, please consider thrown these guys a few bucks, even if you download it then go back at a later date to do so. It'll be money well spent too, because I'm not eagerly wanting a follow up! What can I say, the Swarm's infectious!
~ Jay

Invest In Your Death (256kbps)