No One Expects The Spanish Inquisition... 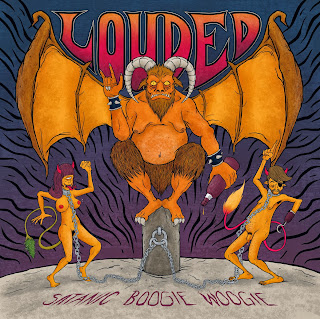 I've never given much thought to the Spanish's take on sludge, but as you can imagine, one glimps of Louded's artwork was more than enough to set my mind into ponder mode. Look at it, it's amazing! It's like a visual representation of the inside of my mind after a day of drinking nothing but absinthe and listening to White Zombie. But the artwork is nothing compared to what awaits inside. Just imagine locking Soilent Green and Karma To Burn in a room with nothing but whiskey and PCP and not letting them out until they've produced 30 minutes of face melting music. Yup, 'brutal' is really the only way you can adequately describe Louded. Well, 'fucking brutal' would really be more apt I guess, because this album doesn't let up for a bloody second. Right from the opening riff you're met head on with an audible blitzkrieg that not only roars and screams it's way towards you but pleasures your senses with a dazzling array of head bobbingly catchy riffs and foot stomping bass licks. It's got that certain something that, for me at least, was born with Iron Monkey. The fundamental all round sludge feel but with a surprising amount of groove, although their own niche here incorporates a nice subtle element of post metal. Not enough to distract you or lead the flow of the album away from it's true roots but enough to give it it's own unique flourish.
But enough talking, go find out for yourself, and head on over to Noizeland Records, part with a mere 10 bucks and get the thing on wax! I'm gonna!
~ Jay