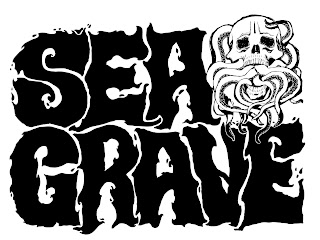 Philadelphia's quintet of Seagrave are just starting out on their voyage, and with the four-pack of tracks included on this demo, they sketch out a rough draft of their intended destination.  First of the four is "Blood Angels", which brings kind of an updated '70s heavy rock approach out of the gate, with ballsy attitude in the vocals and straight-forward riffing.  "Through the Lions Eye" tweaks the guitar-work for a harder edge, but keeps most of the other elements in place; there's also a sense of expanded acoustics thanks to some soaring guitar touches.  In "Laying With Snakes", things get a little bit bluesier, but not enough to really set it apart, as the tempo and delivery mainly stay the same.  "Riders" goes a little further with that blues influence, and feels like the most experimental of the lot, but it can't seem to stop itself from shifting back into standard between the slower bits.
Seagrave's biggest issue so far is that there's not enough of their own style coming through in the songs to distinguish them from all the other throw-back heavy rock acts that keep bubbling up these days.  There's also the way that their name feels unattached to their music, as there's not much of death, wateriness, or doom to be heard so far; something like 'Stone Altar' would be a better fit.  But aside from those points of complaint, they seem to be having a good time making their music, and it does have good energy carrying along its yester-year sound, so if you want more retro heavy rock, they'll happily do it for you.
~ Gabriel

For Fans Of;    Clutch, Father Sky, Orchid, Pentagram, Queens of the Stone Age