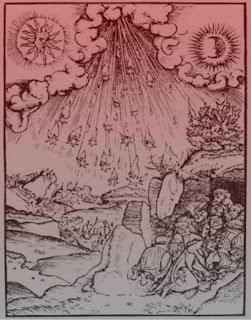 Wizard Cult's been kicking around for a few years, but this release marks their first LP effort, one with a decidedly lo-fi presentation.  Not to say that the quiet mixing and thickened acoustics detract from the experience, but if you're someone who needs major-label-level production, you probably won't be able to take too much of the album.  Those who are OK with the murkiness will find a breed of doom that embraces fat-tubed feedback for some excellent experiments in stony psychedelic fusion.  The yelling of the vocals provides a counter-point of punchiness to keep a grounding in the material realm, an important touch with songs including not only "Doom-God", but also both "Goat Demon" and "Goat Demons" back-to-back.  Those last two might as well have been one big two-part track, as the keening guitar at the end of the first howls right back into place after the short silence between them, but the split is probably convenient for live-show considerations.
Over the course of the four tracks, it feels as though every time the trio let their minds drift away to explore the wide-ranging spaciness in the psych side of their music, they're ready with a mean club-swing of doom to knock out anyone whose guard got lowered by the siren call of the whammy pedal.  The abrupt drop at the very end is another nice technique from the band, as anybody being carried along in the slow-flowing doom by that point will have little else to listen to for more.  Then again, maybe it was a genuine bit of roughness from the recording work.  Either way, Wizard Cult have put a a very solid debut, one that, despite the sound quality, just works.  And slams.
~ Gabriel