Right Out of the Blue 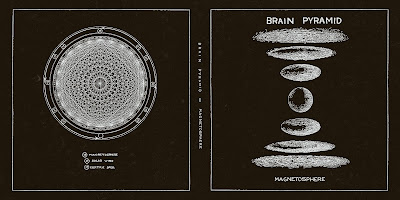 Now out of Spain instead of France, Brain Pyramid have put out their first release from their new home base. "Magnetosphere" is made up of three tracks, two of which are improvised jam sessions. Using these extended jams really gives the album an organic feel, letting you catch something new in the music every time you listen to it. The title track kicks things off, and at more than twenty-five minutes, it's clearly one of those improvised jam sessions. Opening up with an audio sample, it slowly builds from some faint guitar lines and slow drum rhythms and eventually turns into an acid soaked space voyage by the times things wind down. The other improvised track "Solar Winds" follows right behind that, with an eight and a half minute run time, it's another instrumental stoner rock jam, but without all the drawn out sounds and psychedelia. Kicking off with a blast of fuzzed out blues riffing, things get off to a roaring start and doesn't slow down a bit until the end. The release date is still a ways off, not until November 1st, so there isn't a ton of information out there about it yet. But if you're into instrumental psych jams, this will be one to watch out for over the next couple months.
~Skip