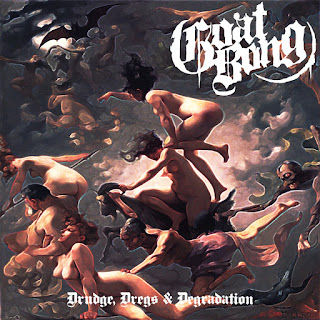 This new EP from one-man band Goat Bong lashes out with a quarter-hour's worth of fuzzy heavy stoner psych with a slight lo-fi rasp.  Though the drums stick out a bit in the mixing, the three tracks are a fun chomp of black-light Halloween attitude.  Going fully instrumental puts a better focus on the atmosphere, which gets plenty of thoughtful touches to liven up the zombified mind-set; a personal favorite was the organ-set keyboard in "A Spire in the Mist", though the scraping chains and tolling bell at the out-set of "Onward Strides the Mammoth" were close contenders.
It's kind of like White Zombie with the thrash, samples, and need to be the center of attention bled out, leaving behind a lean and mean spook-house metal machine with some shredded flesh still hanging.  A good entry-point to Goat Bong (go ahead and pick up their album Goat Worship & Sodomy if this is where you're starting) and a tasty way to whet your appetite if you're already a fan.  And remember, there's nothing stopping you from lighting up a Jack-o'-lantern or hanging up a skeleton whenever you feel like it, so if the music moves you to do so...
~ Gabriel