Hurtling Through The Cosmos... 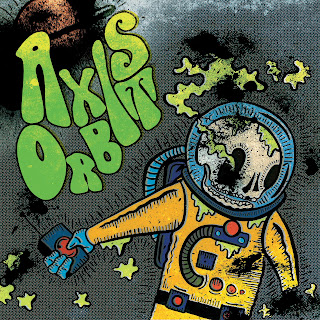 After their excellent debut EP last year, Axis Orbit (who seem to have dropped the / from their name) are back with a full LP of their spacy heavy psych rock, with some tracks from the EP given a polished reworking for inclusion.  They start off with "Hazy", a suitably smooth glide into smoky sound to establish the album's attitude, then float off into the rest of the album, with a diverse character set by song titles such as "I Can't Feel a Thing", "In the Summer", and "You Were a Friend of Mine".  Bleary fuzzings from the guitar and gut-level throbbings from the bass melt together with cracks from the drums to stave off the grogginess that could easily be induced by such heady material, but it's not all manic reverb.  Some bluesy soulfulness comes through at times (as in the previously-mentioned "I Can't Feel a Thing"), with the strings switching to sweetness until "Riot Canal" flows in to burn things down.
The music takes something of an acid western turn in the album's second half, with cleaner guitar popping up (maybe most notably in the just-barely-restrained vibes of "The Owl") and a more sentimental attitude taking over the riffing, noodling, and vocal stylings.  It helps build a strong sense of AO's creative depth, and handily blows up any misconceptions that they might be just another heavy psych band.  Not to say they can't do that when they want to, as the low-tone down-tempo moodiness of closing track "Infidel" emphasizes, but there's certainly more than the usual to be found in this spacy cycle.  A run of 300 vinyl copies is available through Nasoni Records (or directly from the band, with a bonus T-shirt), so if you've been looking around for some deep musical musings for repeated ear-dives, get on this.
~ Gabriel