They Came From the North 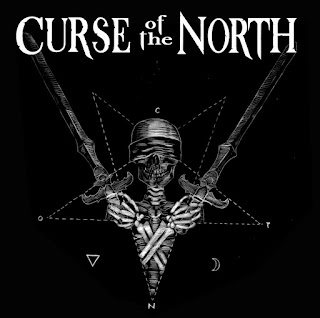 Oh, you haven't heard of these guys yet? Well, time to for your daily dose of learning. Picking up from the ashes of a couple now defunct bands like 3 Inches of Blood. Curse of the North offers their sacrifices in the form of some massive sounding doom metal. There's a little something for just about any doom fan, some retro guitar work for all of the people who dig that classic 70's doom metal vibe. You have darker, more intricate arrangements for all of those modern doom purists that are out there. Opening up with the single “Sleep While You Can”, it demonstrates the more traditional side of doom metal that they operate in, but still with that strictly Curse of the North style filter firmly in place. Opening up with loud and thick drumming, that's quickly joined by some ringing bass notes, some raw but dynamic vocals drop in behind that, with the crunchy guitar sound making its appearance last. This carries on until a little bit before halfway when a scorching guitar solo starts up and carries the song to a new level. Heading off in a new direction, picking momentum and riding it out like a stampeding war horse. The further you dig into the new album the more you'll see their balance of styles and directions put on display, but the opener is a good crash course for the uninitiated. It'll still be a while until October 23 when the album is released on Static Tension Records.
~Skip
For Fans Of; Black Sabbath, Grand Magnus, Demon Head
Facebook • Website • Bandcamp