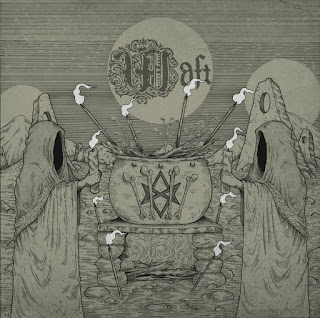 I've been waiting a long time to bring all of you this review. Pretty much since I walked in on the middle of their live set for the first time and instantly noticed my rib cage rattling around in my chest. I first mentioned them in my Rising Sons article a while back, but they are well worth revisiting with the release of their debut LP "Chronolith". Six pummeling tracks of sludge tainted stoner doom metal later, and you're a changed person, the kind of changes that coincide with being hit in the stomach by a three ton hammer. Opening things up with the raucous bout of "Eternal Sigh", which is a five minute exercise in despair. Starting off slow, and even dropping down to the pace of a geological process at one point, it soon gives way to a torrential flood of pulverizing drums, with a charging bass line and hectic guitar riffing. It's not content to end there though, finding a happy medium in the mid-tempo area, they fall into a sludgy groove that's suitable for stomping the skulls of your enemies. Digging into the album a little farther and you come across a personal favorite called "Southern Sky", and as the band so aptly puts it, the song is about being southern as fuck. After a few droning guitar notes, plus some loud and round drumming, things kick off into a pounding groove, with a southern flair in the guitar riff, and snarling vocals that could almost of come from a rabid dog. Being the shortest track on the album, it is a bruiser with an unmistakable Bongzilla vibe. By the end of the three minutes it's almost like you can feel that hot summer sun beating down on you. The entire album has a raw and gritty feel, like you're standing in a grimy dive bar watching them play in person. But, if you like your doom metal heavily stoned and drunk as a skunk, you'll love Waft. Plus, they made it a "name your price" deal on bandcamp, that's as good as they come.
~Skip