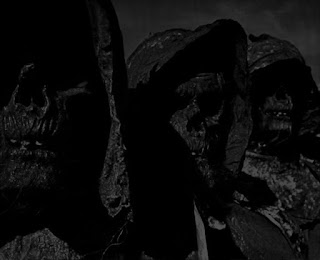 "Drugged Up Demonoid", the first of the two tracks on the New Jersey-based DopeRider's debut demo, is a ~15-minute stretch of sonic perversions steeped in stoner doom ritual, with the buzz of the recording folding neatly into the fuzz of the bass.  Blasting amplification on the vocals (and everything else that can be wired into it), the DR three-piece rumbles through the track like a moss-covered tank, shaking and hissing out black soot, but pressing on with determination.  There's no shortage of fire in their bellies as they bring the noise, and I was half-expecting to hear an Evil Dead chainsaw rev to life at any moment, especially after the cherry-picked Frankenstein sample that opens up the demo.  Instead, I was hit with a head-spinning wave of truly heavy psychedelic inventiveness, as DR rips into a combo of hot-line guitar, wall-o-sound bass, and drumming with some real violence behind it for an long cut of the song before dissolving into a pit of acid distortion.
"Fractal Resin" serves as the rest of the band's opening salvo, with a well-executed chain of feedback leading into its more concisely demonic form.  The sense of friendliness is cooked off into vapor, leaving a potent concentration of menace behind.  Whether taken on the standards of a demo or a full EP, DopeRider have dropped a damn strong start with these two songs, one that can leave you just sitting there feeling vaguely stunned once it's over (assuming you had the volume up to proper levels, of course).  I'm not sure which track to include as our streaming example, as they cover such different ground, so today you get the whole release.  Keep an ear on this crew.
~ Gabriel