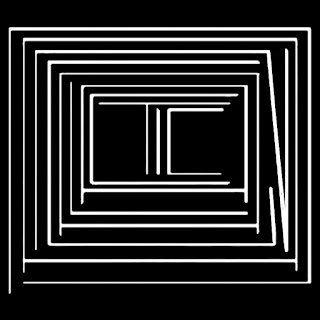 There's all sorts of genre labels you could stick on this band's debut effort, but for our purposes today, Pangalactic have created three tracks of instrumental psychedelic rock, from outer space. Somewhere out there is a planet with a few stoned creatures recording this music, and it just gets sent here with a Connecticut stamp on it to confuse all of us. It's obviously the idea they're going for though, with the lead off track being called "Re-entry Blues", which is probably my favorite of the three. After a hypnotic bass part, and some ringing guitar notes that sound like radar pings, things get kicked off with high tempo, twangy surf rock styled riffing, mixed with psych bass grooves and some smooth, jazz influenced drumming. Around the three and a half minute mark things take their first left turn into deep space while slowing things down a bit. It doesn't last very long though, and it quickly resumes the swinging rock riffs that really got things going. The next track follows a similar template, but the last one "Gilgamesh" comes out of left field with tribal chanting that sounds like it could of been something out of "Cannibal Holocaust". If you're into any sort of space, psychedelic, or post-rock this EP is worth checking out, and being "name your price" you can't go wrong.
~Skip