In the Mushroom Garden 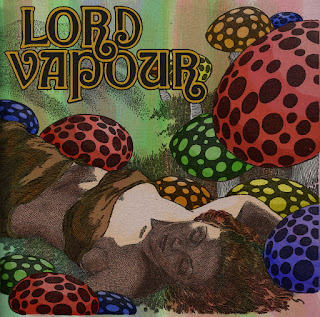 If you've heard the instrumental stoner rock outfit Brunt that stormed onto the scene over the last couple years with their debut effort through HeviSike Records, then you already know one of the lads behind the psychedelic rock project, Lord Vapour. The band uses a heavier spin on a 70's psychedelic rock sound, managing to get things a bit fuzzier and more upbeat. Things stay pretty mellow and subdued to begin with, but they keep the fuzz close by, and put down a nice big dose of it at will, often injecting it into the song with long bursts then letting it fall back a bit. Of the three tracks on the EP, the middle child "In the Valley of Stars" was a favorite. Kicking off with a slightly fuzzed bass line, it takes a few moments for the droning guitar to make an appearance, followed after a bit by pounding drum rhythms with the raw and organic vocal performance popping up soon after that. The song carries on like that for about half of the six minute duration, until after the halfway point the guitar goes rogue for a minute or so before the whole band drops back in to end the track with a high energy jam session. This is an excellent debut effort for the band, it'll be interesting to see what they follow it up with.
~Skip