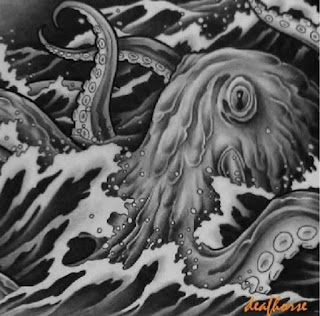 The latest record to emerge from this UK quartet's minds plays in the realm of grungy hard rock, though they have more fun and creativity with it than that short description might lead you to assume.  Though it rarely gets to be too on-the-nose, you can hear how the band also draws influence from blues, psych, a little post-punk, and even some pop (very lightly used, but evidenced in the catchy hooks and choruses).  If you want metal, they've got that too, but blended in so thoroughly that it might bypass the ears of purists until an especially wicked jab catches them unawares.  Hearing the band's handling of energy is an interesting side to the album in itself, with harder pieces such as the bass slamming and buzzing in "White Lies" or the grinding riff of "Lose Your Head" easily shifting into activity less feverish but just as riled-up, and exploding after appropriate intervals back into the beatings.
There's also a good sense of humor to the band's style, which helps provide balance to the frequently depressive lyrics.  Bright cuts of guitar or a particularly over-the-top patter of hits from the drums are just a couple of ways in which that cheekiness is handled on the instrumental side, while the vocals have a persistent sardonicism that manages to keep him grounded (for the most part) even at his highest pitches.  It's a record that hits a strong stride after doing some establishing work, then kicks along with deepening character right through to the end.  "Stronger Than You" provides a solid closer with enough of a trail to leave you pining for more, and the album as a whole comes together with panache and precision.  If alt-flavored grunge or inventive rock in general is something you crave, get yourself a copy.
~ Gabriel