In the Dead of Night 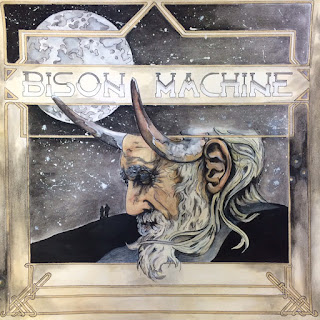 Another stellar release from the people over at Kozmik Artifactz is the latest album from Bison Machine. "Hoarfrost" reminds me of 70's hard rock attitude with a nice, heaping dose of modern day fuzzed out, stoner tones in the mix. There isn't really anything new offered here, nothing experimental and overly complicated. Just straight from the gut, pounding rock and roll music with as much soul, as groove engrained in it. I really became enthralled with the second song on the album, "Old Moon". Opening up with a ringing guitar note, and building drum rolls, it isn't long before the guitar takes over for a minute before things mellow out. Once this happens, a raw, but airy vocal performance takes center stage, with the tranquility only being broken by hairy, distorted tone coming from the guitar riff. The song follows this series of high energy peaks, mixed with the slower, more subdued valleys of sound over the six and half minute duration. Once past the half way point though, things begin picking up momentum and doesn't look back until quickly dropping off at the end of the track. This is the track that stuck with me, but when put in it's proper place on the album, the entire thing turns into one big slab of perfectly executed stoner rock. For the sake of your pockets when it comes to those shipping charges, people in the US can grab their vinyl directly from Bison Machine's bandcamp (where the digital version is name your price), while you fine European folks can pick it from Kozmik Artifact.
~Skip

For Fans Of; Greenleaf, The Sword, Dozer