Through Smoke and Darkness... 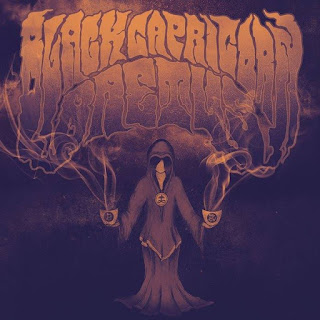 One of the meanest splits so far this year, two Italian heavy weights cut loose with both barrels for a pairing surely made in the backroom at some virgin sacrifice no one knows about. First up on the album is Bretus with their track "Haunter of the Dark", a six and a half minute trudging doom opus that's not quite equal parts Black Sabbath and Type O Negative. After opening with some thunder and church bells, a snarling riff starts up and huge vocals make their presence felt, things meld and solidify more as slightly harsher vocals make their appearance well into the song. If you're familiar with their work, this one won't let you down. The flip side is all about Black Capricorn's crushing doom metal sound that they've made their name on. Droning riffs that drag themselves along to the pounding drum rhythms, with the only reprieve being a howling guitar solo in the second half. All of this with deep, powerful vocals presiding over the whole thing. Definitely the grittier of the two bands, they offer the perfect contrast to the relatively cleaner sound from Bretus. While it took a little looking to find a place to buy the split, it looks like you can grab it from the record label Arcane Tapes here.
~Skip