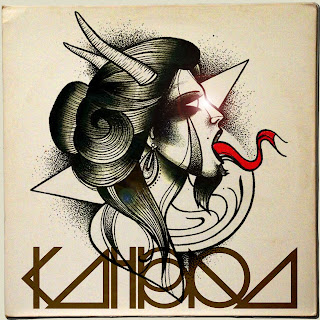 Making their debut with this four-track EP, Kahbra are a semi-recently-formed band from the busy city of Rio de Janeiro, Brazil.  A little controlled bleariness to the production helps play up their stoner/desert rock, but it seems like they're still trying to get a bead on how to set themselves apart from all the other modern heavy rock outfits.  Their success at pulling together classic-sounding riffs also puts them in the position of sounding just a little stale, despite the good energy they bring out in their performances.  The slower, bluesier pieces provide some of the more memorable moments, getting some high-lighting in the middle two songs, "Rattlesnakes" and "The Giant's Dream", but the shift from the stompy rock of "Drown" into these and back into it (at a slightly lower gear) for "What I Lost" at the end can be a bumpy ride.  Still, they've got good grooves, good tone, and good titles, so don't write these guys off, even if you've got little chance of seeing them tour your part of the world anytime soon.
~ Gabriel