Sounds From Beyond Space 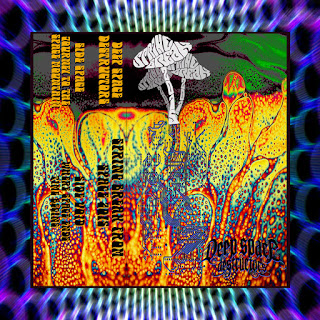 The title kind of sums it up for this one. Like upbeat party rock? Like spaced out psychedelia from the depths of the cosmos? You're in the right place, this new EP from Finland's Deep Space Destructors will push all the right buttons on your control panel. Even though it's only a couple of tracks, they make for quite the celestial voyage. Cranking up with "Journey to the Space Mountain", the opener is almost of eight minutes of high energy psych rock, launching out of the gate with catchy, groove laden bass and guitar riffs. The farther you get into it, the raw vocal melodies show through, with some spacey sound effects coming through here and there. The first track keeps that same energy level for the most part, because the second track starts off much mellower, relying on some psychedelic noises, sparse drumming, and audio samples to create a psychedelic atmosphere instead of using riffs and the usual tools of the trade. While seemingly random for the majority of the time, the eleven minute track still has a mesmerizing property where you just can't turn it off. While this is far from the band's first effort, it is their first vinyl release. You can pick up colored and black copies from Sapphire Records.  It seems that this would be a great soundtrack to a bout of mind expansion too, if you're into that sort of thing.
~Skip