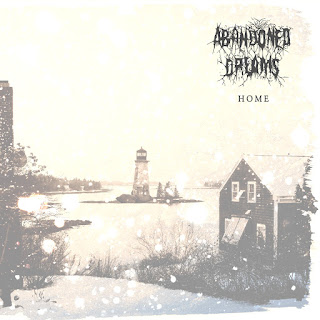 The release of this EP marks a new chapter for the German band of Abandoned Dreams, as it's their first without founding member 'Liesa,' who parted ways after the release of Isolation and Solitude towards the end of 2013.  Working as a trio now, with the standard bass/drums/guitar/vocals arrangement, it feels a bit like this EP is their way of figuring out their new dynamic, though any uncertainty they might have is well-hidden.  First of the three lengthy pieces is the title track, which starts up with a jaunty, almost post-punkish riff from the guitar, using palm-muting or some similar technique to give it a chopped style like a worn-out music box before shifting back into more traditional metal as they expand that initial melody, and the rest of the track follows solid exploration through its paces on into the rest of the EP.
A thick treatment of drums and cymbals, along with the bass' steady grounding, keeps things heavy in "Keep the Lights Burning" while the vocals provide expression of the melancholy mood; things get emotional, but not to the point of weepiness, and towards the end the music swells into a wintry sort of grandeur before handing things over to the closing track.  The most striking initial impression of "Embrace" is the way it tempers a funereal atmosphere with a percussive side more lively than that genre usually gets to employ.  The guitar and bass are clean in tone, but bring an effective sadness out in their sliding notes, and when the vocals emerge (about 4 minutes in) there's enough of a precedent set for their emotional bent that it comes off as natural and unforced, particularly as it lets the strings segue into harder and faster forms, nodding to the group's blackened past works.  All together, the three songs represent the group's new line-up quite well, and it's certainly worth checking out if you want your doom cold and frosty.
~ Gabriel