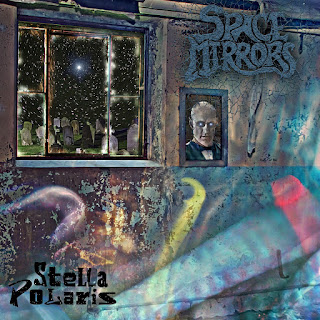 With Lovecraftian references and narratives pervading the final album in their Cosmic Horror trilogy, Space Mirrors begins its 11-track run with space rock so upbeat that it brushes against power metal at times.  The energetic approach seems like an odd one for their chosen subject matter (particularly the guitar, which causes most of the power metal comparisons), but there's an injection of theatrical melancholy from the vocals that provides a touch of lurking fear.  For the first third or so of the album, the synth-work feels under-utilized for something with 'cosmic' right there in the title, but it picks up before too long for some trills, warbles, and blats, with "(A Passer) Through the Storm" as the first to really accentuate its presence (though it drifts back away after that).
Things continue to pick up from that point, thanks to heavier bass-waves appearing in the following track, "In the Blood", and the chipper attitude of the earlier tracks further diminishes (though it never fully disappears) with the following songs.  "Burning Chaplet" assumes a western-doom veneer with seeping amped strings and clean acoustic picking leading to a shredding solo, "West of Arkham" is powered by a mean run from the drums (couple with some smoky saxophone at one point), and "The Crawling Chaos" takes the position of album big-boy with an 11:11 stretch of menacing atmosphere.
"Essential Saltes of Humane Dust" completes the album's descent into heaviness, stripping off most of the ornamentation on its way down to expose the band's proficiency with straight-forward beats and riffs, and "The Master" provides the final finish in the form of a spoken word piece complemented by strange piping and synth burbles.  It's an interesting course taken by the album, and it makes for an ambitious journey through styles, but it's not without some rough patches.  All in all, something to investigate for fans of tech-inclined space rock or occult doom rock.
~ Gabriel

Space Mirrors - In The Blood