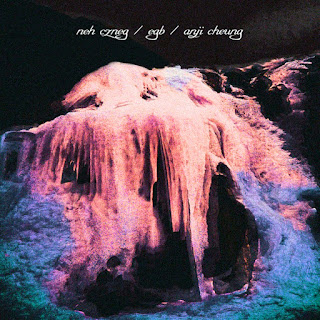 I was tempted to begin this review by talking about how three-way splits are usually more of a gamble in coherence than the standard double-up splits, but that would have been an exercise in irrelevance, as unlike most releases by three different artists bonded by a record label (in this case, Droning Earth Records), this is a set of collaborations instead of a jumble of individual efforts.  Further adding to the curiosity factor is how all three tracks ("Lurking Fear", "Madness from the Sea", and "Horror in Clay") take a Lovecraftian phrase or story title for their name, and then attempt to actually channel some of that atmosphere into the sonic environments instead of just name-dropping as a lure or slathering it on as superficial cosmetics.  The moody doom goes right down to the bones for these pieces, which take the tack of building around feedback, drones, and indistinct noises (whispers and such) for their nocturnal excursions, with some infrequent and electronically-shredded vocals as the only human element.  If you want to sit down and just have some dark sound-waves to engulf you, it's a treat, but those looking for steady beats and distinct riffs will likely find it more than a little off-putting.
~ Gabriel