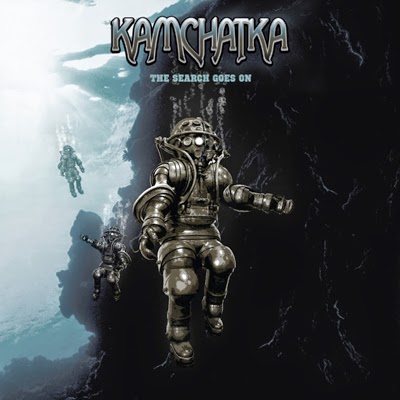 With a long run of memorable albums, Sweden's own Kamchatka is back with their follow up to 2011's "Bury Your Roots". They've seemed to of changed the sound up just a bit with "The Search Goes On", adding more edge to their already well established Stoner/Blues Rock sound that has always encompassed an array of influences from all over the musical spectrum. The quality of riffs remains the same of course, and they're always front and center, the star of the track. When you're not swept up in the raw, soulful vocals or one of those riffs, you get to what makes any great band, a rhythm section that performs their job flawlessly, always keeping the groove tight.
The opening track, "Somedays" opens up with a bit of feedback that kicks off a wailing guitar intro, as it goes on and the rest of the band drops in, the track hits full swing and you're given a galloping bass line and rolling drums to back up the main riff. The vocals on this one is soaring, the whole thing screams 70's Hard Rock, all the way up to the jamming Lynyrd Skynyrd-esque solos at the end of it. The next track, "Tango Decadence" is the album's single, and it's a no frills Heavy Blues Rock song from the opening notes, blasting out of the gate with a crunchy riff and slamming drum part, shortly joined by the thick bass riff to fill out the mix. The vocals take on more of an edge, belting out those raw, clean Blues vocals that are full of soul. That foot stomping riff keeps the jam going while the song moves along, until the final reprise, after which it delves into a short acoustic solo and fades away. The title track, "The Search Goes On" is what finishes out the album, and it's a Stoner Rock jam straight from outer space. The track builds from two echoing notes all the way to an arpeggio riff, with the whole thing subtly being laced with spacey sound effects in the background. As it goes on and nears the halfway mark, everything slows down just to build back up behind an electric organ and the mighty guitar leads being put down. The whole thing starts to dwindle down after that, like a volcano going dormant after laying waste to everything around it.
"The Search Goes On" is sure to be mentioned in many year end lists, as well it should be, with heavy, catchy music, and artistic, intelligent lyrics, it's definitely worthy of praise. If you're a fan of their older albums, even though it's not quite the same sound, you'll still be in for a great Heavy Rock album with tons of character. You can get in on it through their label Despotz Records.
~Skip