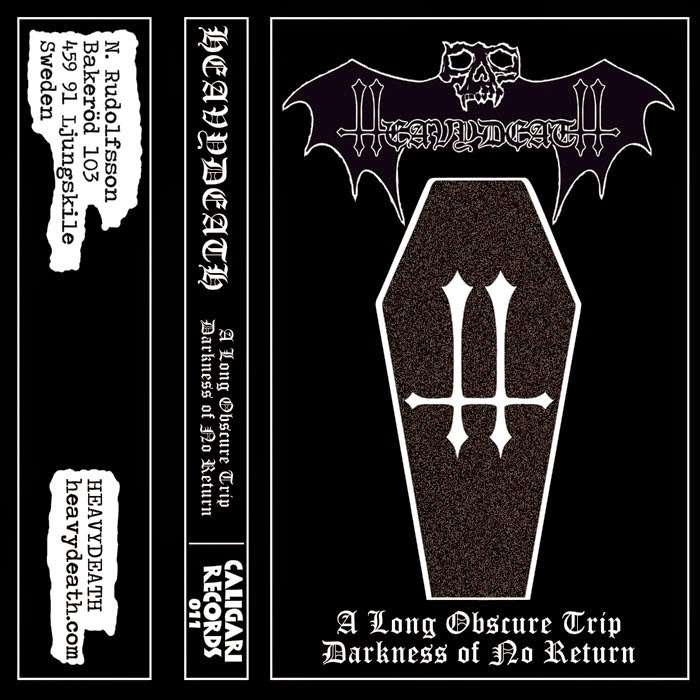 Sweden's HEAVYDEATH and the US's Caligari Records have teamed up again, this time to release their second and third demos on a limited run cassette which is already about to sell out as I write this. It picks up pretty much right where their first demo ended, carrying on like a funeral procession through the abyss. The "Demo II: Darkness of No Return" side of the tape opens with an slow build up to a crushing riff that would seem perfectly fitting for a quest through cyclopean ruins, slaughtering anything that stood in your path. As you get through "Darkness of No Return", you come to the song "Eternal Sleepwalker", and after a short droning opening with lots of guitar noise, and slow plodding drums, the brutal riff sets in, slow and colossal, with the guttural vocals sounding like their being bellowed from the darkest pit of hell, after a short build up your hit with a mid-tempo, sludgy riff fest, with the drums kicking it up a notch to keep up its' march forward. As the tape flips and you make it to "Demo III: A Long Obscure Trip" and when the opener "Desolation" starts up you're immediately accosted with guitar feedback and a rolling drum intro, then with almost no hesitation the riff comes in and gives the track an immediate spacey vibe, with the drums blasting behind it, lending to the enormity of the sound they're working with. After the tempo drops off again, the music takes on an even slow Funeral Doom vibe, but like all of their music so far, nothing stays the same for very long and you're brought back up to mid-tempo with wailing guitars and furious drumming. The next song on this side is the title track "A Long Obscure Trip", it opens up with that same gigantic wall of sound this band has trademarked, enormous, crushing, and atmospheric all at the same time. The drummer keeps a serious groove on this song, overall it slows and speeds up, but always makes sure to come full circle and end on a heavy note, droning out slowly to the next track. After that you're hit with my favorite probably, "All I See is Decay", sounding more like a Sludge Metal song than the rest of their catalog, it opens up with a screaming guitar part, with the drummer slowly building his sound until it's at full swing behind the distorted riff and ominous vocals that sound almost more chanted than sang, but it all slows down after a few moments and takes on an even darker atmosphere this go 'round. This is the sound of Death Metal after being force fed a bottle of Vicodin, and you should be able to find everything you need at either the Caligari Store or HEAVYDEATH bandcamp to get your 50 minute fix of Death/Doom goodness.
~Skip

For Fans Of; Hooded Menace, (early) Sentenced, My Dying Bride