Nuisance of Majority ~ Brains, Monkeys, and the New World Order (2012) 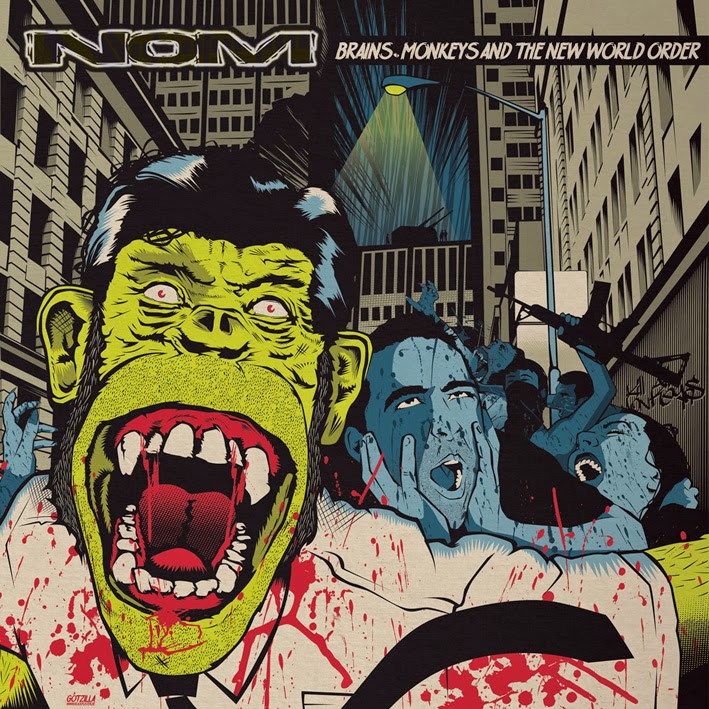 This is a hidden gem from a couple years ago, but for those of you who, like me, that have never heard of Nuisance of Majority. This German four piece plays a chaotic, explosive mix of Stoner Rock and Hardcore Punk. I'm sure the term has been used before, but it would seem that this group would easily qualify for the moniker "Stoner-core". Moving between groove-laden, but still heavy Stoner Rock type sections, and parts that sound like they were lifted directly from the hayday of Hardcore. It's a slightly different take on Stoner Rock than what you're used to hearing, but all of the well loved elements are still present and accounted for, just punctuated by bouts of intense Hardcore Punk.
The second track on the album, "Deconstruction of Humanity", opens with a rather tame sounding Stoner Rock riff, but quickly switches gears and suddenly you're confronted with a blasting Hardcore song, with angry, screamed vocals slapping you in the face. The bulk of the track is in Hardcore mode, with the slightly more melodic riffs bleeding through just a little bit here and there, that is until you get towards the end of the track, and then the Stoner Rock is back front and center. The fourth track, entitled "Whatever" demonstrates a more middle of the road approach to their sound, the Stoner Rock is apparent within the first few seconds, and that Hardcore sound gets it kicked off, and is always apparent somewhere in the mix. Opening with a blasting drum part, and fast but still melodic guitar riffs, it starts off sounding a bit like earlier Orange Goblin, which is never a band thing. As it proceeds though, the Hardcore shines through a bit more here and there, but that Orange Goblin styled vocal performance still pops up throughout the whole track. "You Can't Break Us" is the next to last track on the album, and it jumps right in from the start, with blast drum beats and shouted vocals, you're dropped into a meat grinder, and are at it's mercy. While the vocals may get cleaned up a bit here and there, moving away from the shouted, raw vocals, you're sometimes left with a cleaner performance that very reminiscent of Stoner Rock. The whole song isn't an outright assault though, after the halfway mark you're greeted with some classic Stoner riffs, but all of that aggression and chaos come storming back at the drop of a hat, and leave the track on the high energy note that it began on.
While I'm sure these guys could of made themselves into an excellent Stoner Rock or Hardcore band, and would of succeeded with either I think, mixing the two down into their own signature sound was probably the best solution, making them slightly different from the status quo. Granted it took a couple listens for this group and their sound to really grow on me, but it did just that. You really can't argue with the "Name Your Price" deal going on for this album over on bandcamp, it's an excellent album for anyone who's a fan of Hardcore or Stoner Rock, especially that slightly harder edged Stoner Rock like Artimus Pyledriver or Blind Dog.
~Skip