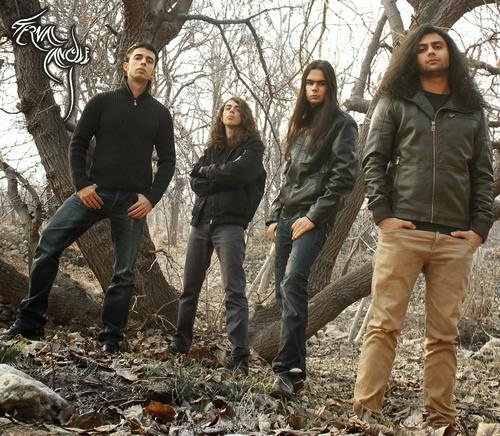 Iranian doom metal crew Eternal Candle recently got in touch with us at RWTD, and while they don't have a full release to their name yet (they're releasing their debut LP later this year), they had three loose tracks they wanted to share, and in our opinion, the tracks have enough punch and panache to them to put out for wider availability. “Blossom Of Old Scars” is a funereal dirge with an impressive range of vocals and a strong sense of melody carrying the doom along, with some fantastically on-point drums giving it a healthy kick of propulsion so as not to get too bogged down by the despair. “The Silent Forest” brings in some quiet piano against some blackened vocals and guitar wails, and pulls off the combo with some unexpected twists that really help elevate it.
Lastly, there's “Autumn Reflection”, which is their tribute cover of a November's Doom track, and which shifts the vocals back towards cleanness while switching between distorted acoustic and growling electric guitar riffs, doing some interesting mixing of the moods and melodies. All of the songs show an admirable interest in experimenting, stretching genre constraints, and blurring together a number of styles for the best results they can distill, and for a group that hasn't even put out their first release yet, they're remarkably skilled on both the technical and inventive sides of song-writing. Keep an ear out for further developments from Eternal Candle, and be sure to investigate their full-length when it arrives.
If you're looking for a place to get the tracks and hear this group for yourself, here's a band-approved torrent collecting all three.
~ Gabriel


Learn how to get your song on itunes at ReverbNation.com