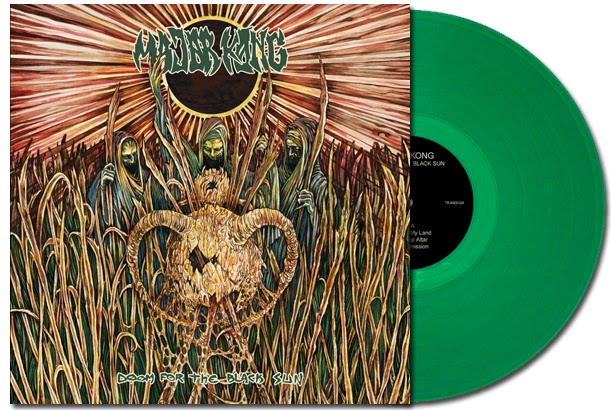 The doom-bringers of Major Kong are back again, with a vinyl reissue of 2012's Doom For The Black Sun.  We gave it a glowing review back when it first came out, but since it never hurts to revisit a classic, we're giving it another spin.  They've adjusted the track order and omitted "Demolition Whale", making for a somewhat different experience, so if you haven't heard it before, now's a great time to get yourself acquainted with this group of trouble-makers.
“Witches On My Land” begins the album with a feverish bit of audio sliced from some horror film to which I can't put a name, but which has a pretty strong sense of Hammer hanging around it as a woman goes mad and sets the stage for the band to slide right in with massive crushing tones.  From the heavy, grinding chorus riff to the wild tears of free-reign chord-ripping, it's a beast and a half... and it's just the start.
Something that stands out to me as I listen to this album after having heard their follow-up, Doom Machine, is how damn good these guys are at crafting their stuff to build in intensity to the final song.  While the songs do get heavier and heavier as each one goes on, they also work in some spots where the suffocating doom is pulled back, you get a chance to breathe, and then they pull it right back over you with an extra layer added.   The clearest examples of this down-right evil technique are possibly found in “The Swamp Altar”, which goes through so many terrain changes that you won't even be able to remember how you came in at the start.  Then Major Kong sweeps you right into “Acid Transmission”, heralded by a choice exploitation film sample, and you're off on another wild trip as they pour out enough bassy reverb to make your skull rattle.  Some credit should also be recognized to their drummer, who does a masterful job of subtly mutating the rhythms while keeping to the pulse throughout the reeling doom.
The last songs, “Iddqd” and “Primordial Gas Clouds”, are where the band tosses away any sense of mercy, devoting a third of an hour between the two to monstrous riffing, wild and expressive guitar, and even more pressurized bass depths.  It's enough to melt the wax and brains out of your ears, assuming you have it turned up as loud as it deserves, so by the end of the album, don't be surprised if you have difficulty moving.  Copies are available for pre-order from Record Heaven.  What more do I have to say?
~ Gabriel