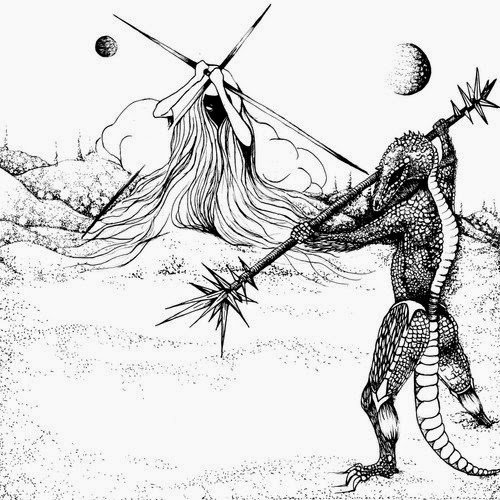 It always makes me proud to see great, heavy music coming out of my neck of the woods, especially considering the kind of dead zone it seemed like 9 or 10 years ago. With both Irata and Solar Halos being from North Carolina, it's good to see more and more of these bands making noise on more than a local level. The first track on the album is Irata's "Semjase", produced by Kylesa's Philip Cope, you can already rest assured it's going to be one hell of a heavy track. Opening with an ambient guitar part, it lulls you into a sense of peace before the band crashes down on you with all of their might in a blast of sound. With plenty of peaks and valleys over the 9 minute course of the track, the band really gets to show off how talented they are, between serene valleys of spaced out Psych to the behemoth peaks of crushing Sludge Metal riffs that delightfully interrupt every so often, the single track has just about anything a listener could want. On the flip side of the split, you have the group Solar Halo's contribution "Of the Spheres/Mountains of Creation", and already being a fan of their self-titled release from earlier in the year I could be a bit biased, but this track is magnificent. With the methodical build up, the track opens up into an expansive sounding Heavy Psychedelic tinged Doom Metal song, especially when the female vocalist starts up with her beautifully resonant performance, which is counter balanced perfectly by the harder edged male voice that breaks in periodically. While their track has it's own sonic path that you must weave your way through, you're never lacking in the sound department, always plodding along, the immensity of that wall of sound they put out keeps you floored. The crisp and airy guitar tone, mixed with the way the drummer punches out his notes and the chunky bass parts that really fleshes the mix out and ties the whole song together neatly. This split will be the first release by NC based CrimsonEye Records, they're offering it on two kinds of 10" vinyl over at their bandcamp for all you collectors out there, and anyone just plain ole' into good, heavy tunes.
~Skip