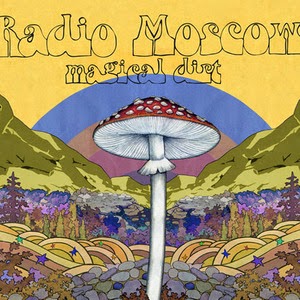 Once from Iowa, the now California living three piece, Radio Moscow, are back with their latest album "Magical Dirt", and it's ace. With heavy, fuzzy guitar tones they put down track after track of Heavy Psychedelic Rock the way it was meant to be. Taking cues from the greats of the 60's and 70's they excel at taking that tried and true formula and making it work overtime for them by adding subtle influences here and there. The rhythm section always sounds exemplary on the album, with the snappy snare drum and rumbling bass notes complimenting each other over the course of it. The guitarist puts down his riffs, but constantly changes things up just a bit, going from Blues playing, to Heavy Rock, to a fuzz drenched Psych riff over the course of just a couple tracks all the while punctuating the songs with a weathered and raw vocal performance, but always keeping melody tucked in there nicely. For instance, in the opening track "So Alone", the vocals have the perfect amount of grit in them, but pairing that edge with the harmony is what really seals the deal. Of course that high level of instrumental prowess is ever present, the song being littered with howling guitar solos, a funky bass tone, and blistering drum lines. One of the songs that I really dig on the album that isn't quite in keeping with their usual sound is "Sweet Lil Thing", because sometimes you just need a good Delta Blues inspired jam to mix things up a bit, and these guys perform it flawlessly, complete with slide guitar. If you're into that 70's Heavy Rock sound like so many of us, you'll be mad at yourself later for letting this one pass by. All of the CD and vinyl options, which are pretty sweet, are available at the Bomp Store and have plenty of different styles to choose from, with everyone else being able to get their digital fix over at Amazon.
~Skip

For Fans Of; The Jimi Hendrix Experience, Cream, Kamchatka