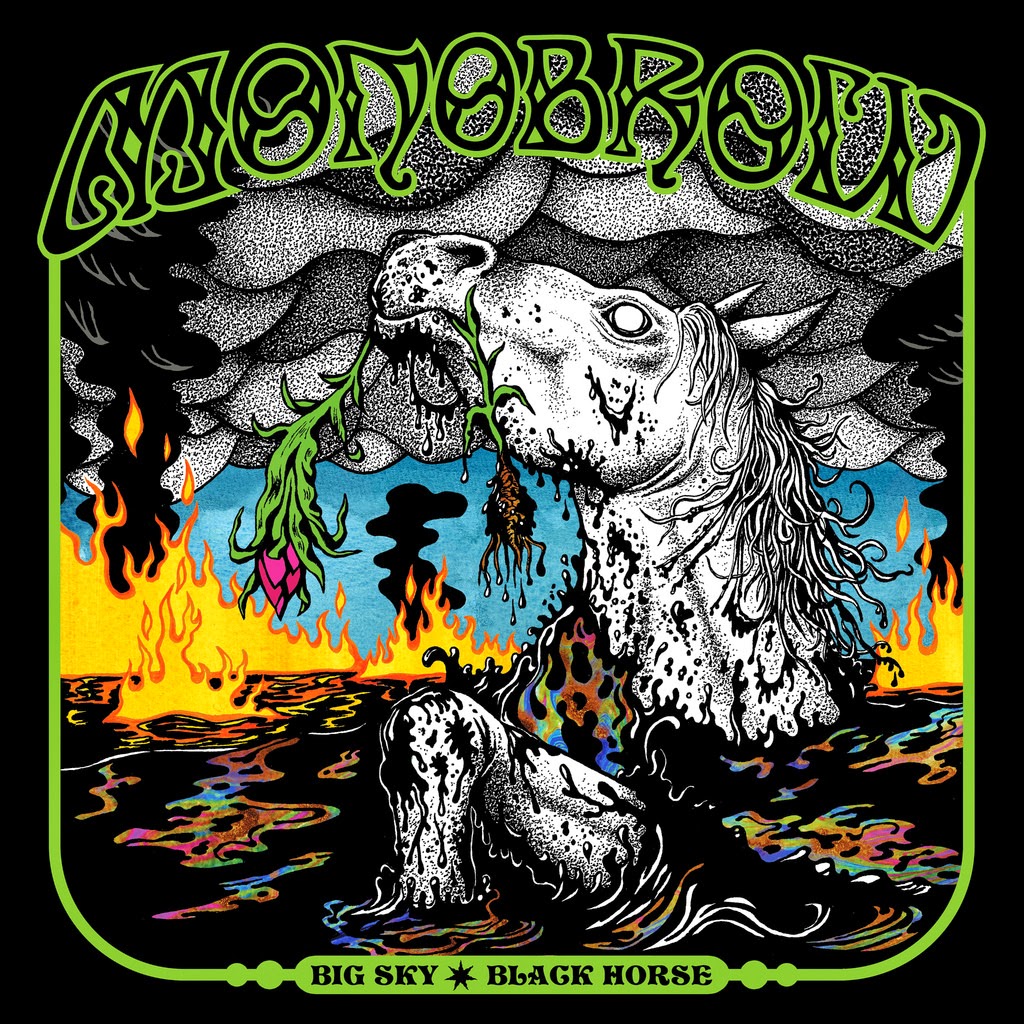 I fucking love Monobrow.
Unorthodox way to begin a review I know, but this three piece have not only been mind blowingly consistent over each and every one of their releases, they're also some of the nicest guys to talk to and have been solid friends to us here. So when we first got word that the new album was in the works, it was always in the back of my mind that this was always gonna be a somewhat loaded review, but to be quite frank, I couldn't give a toss. I know full well by now that what ever they concoct while cranking away in the studio will always be right up my street and I'd never have to lie my tits off when it came to writing about it. Hell, I love unadulterated groove, homages to the oldschool and Canadians... They couldn't really put a foot wrong whatever they did.
But lets put all that aside for a second and get down to brass tacks. There's not much need to bury the lead here, Big Sky, Black Horse is one of the most arse clenchingly fun, thunderous and downright impressive albums I've got to enjoy in quite some time. It's veritably feverish in its intent to get your foot tapping and head banging right from the very beginning. With the opening track, Cicada well and truly setting the style, pace and execution for the entire album, it manages to hone an eclectic fusion of genres within its 6+ minute duration. As the track progresses it ebbs and flows through a mix of balls to the wall stoner rock, post rock, psych and prog. In fact, if you're having any trouble believing me here, just skip to the last 30 seconds of the track and I dare you to resist the urge to pull your best metal face, air guitar and bang you're head simultaneously...
But don't panic, the guys don't blow their collective wads all on the first track. Oh god no. The remaining 30+ mins are crammed full of some, if not, the best instrumental stoner rock you'll hear this year, and I'd put good money on reiterating that statement come December. This is in no small way down to the fact that the guys evidently don't rest on their laurels. Going by the ethos that just because you've found an absolutely killer lick, it doesn't mean you have to flog it for all its worth until it looses all value and the listener's flat out bored senseless by it. Nope, once that riffs served its purpose, it's on to the next one, and who can blame them? They seem to have some kind of demonic bottomless pit of inspiration from which to tap from. One second you caught up in some good old Sabbath worship and could swear you're listening to an alternative cut of Master Of Reality and the next everything's mellowed down and you're catching elements of Houses Of The Holy... Or, if you really wanted to go off the beaten track, listen carefully and you'll heard touches of Sir Lord Baltimore, Dust and Speed, Glue & Shinki resonate through some of those more classic sounding sections within the likes of Ancient Arctic Wanderer and Immortal Dwarf. It's beautiful. But although that iconic decade or so seems to be Big Sky's... influential backbone, the likenesses don't begin and end with the 70's heyday. Even just a passing listen will leave any fans of the likes of Mars Red Sky, Nebula, Karma To Burn or even Orange Goblin undeniably feeling catered for. When tempo's not slow and low and winding down to a trippy psychedelic doom bridge, the big guns come out and the fret work gets beaten like a ginger step child. Enormous riffs just appear like out of nowhere like a Kraken from the depths. The album's title track is a real testament to this. Beginning at a gentle and somewhere ghostly pace, it's scarcely at the 2:30 mark of its nigh on 12 minute run time before you're hit with both barrels and knocked clean on your arse with a ridiculously catchy sonic assault. In fact, the whole affair is so awe inspiring and captivating that its easy to listen to the whole album from start to finish without realising the whole thing's instrumental! Now, that speaks bloody volumes!

So as if it all couldn't get any better, once again the trio have dipped into their own pockets and forked out for this slab of greatness to be given the old wax treatment! Available in two editions, both milky clear, with either white or black haze. Which ever one you decide to punt for, you can head on over to their Bandcamp page and snap one up for just 17 bucks! Which lets face it, is practically daylight robbery. But get a wriggle on, but a whole lot of them have already vanished!
~ Jay

But if you are feeling especially tight arsed, or if you've gone and spent all your pay check on blow and hookers, again, fear not as we've teamed up with the lads and are giving you all a chance to win a copy and it couldn't be simpler!

All we are looking for are people's submission for the next Monobrow song title.

Thats it!
The winner will not only get a free copy of Big Sky, Black Horse, but the guys will even write a song based on your titled and include it on the next EP or LP!

To enter just click HERE and drop them your song title, name and email address.

You've got until 10th August to enter, so grab that bong and get creative!