The Price of Dirt 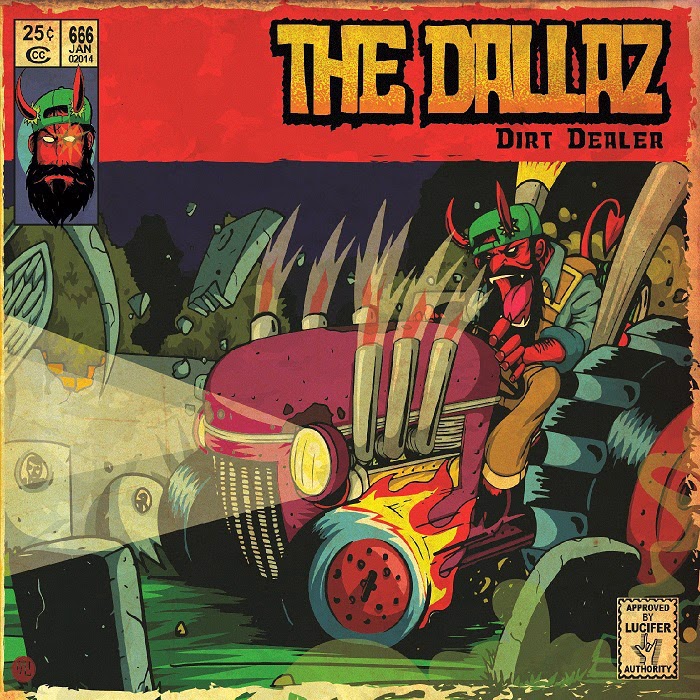 I've long been a fan of heavy, three piece bands. It's the bare essentials for a rock band, the stripped down skeleton, and when the right people get behind those three instruments, they have the ability churn out some of the most pulverizing, ear drum pleasing music to have ever been released. This particular trio hails from Bologna, Italy, The Dallaz lay down a super groovy yet hard edged and aggressive style of Stoner Rock that loves the influence of harder sounds like Punk and Metal in their unique concoction. In the opening track, "Eye of the Wolf", you're immediately struck by the punching drums and screaming guitar riffs, but underneath all of that the bass guitar is laying down a stellar groove and while it does take until about the half way point for the vocals to drop in, it's worth the wait. While the singer seems to switch up styles slightly throughout the course of the album, this one has a certain Doom Metal kind of quality in the performance, adding a slightly darker vibe to the track that I really dig. Then in just the very next track, "Travellin' Blend", the vocals switch to a grittier, Grunge styled sound, which is a bit more typical in the Stoner Rock game, but still executed exceptionally well. While that's happening, you have a twangy, Southern Rock riff burning it down in the mix, and even a harmonica break in there, just for good measure. Once you get deeper in the album you're never short on variety, while all the tracks fall loosely in the same category, all seem to have a different sound and tone to them. The fifth track "Ridin' In My Mind" adds a shot of what sounds like bluesy Garage Rock into their already exemplified and heavy Stoner Rock sound, by adding that slight uptick in tempo and some shouted vocals, it changes the overall sound of the band, using this like all of the other songs and really showing off their talents and giving insight to where they draw their influences.
By always switching things up, if only just a little, the group never seems content to play the same song twice, and in a time where some bands put out an album where every song sounds just like the previous one, it's refreshing that a band can find a way to work in so many different sounds without it sounding forced or overdone. If all of this has peaked your interest, you can head over to Ozium Records and order your physical copy of the album, or hit up their Bandcamp for the "name your price" affair, but however you go about it, you need to get in on this one.