A Stroll Down False Memory Lane 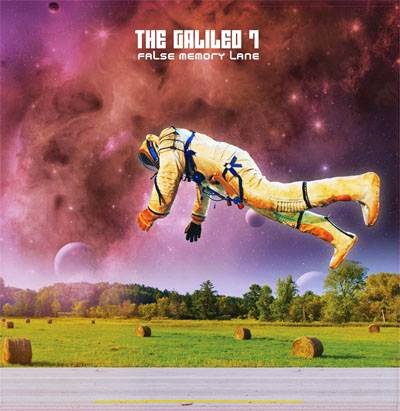 A couple weeks ago, I wrote a piece on the latest single from Graham Day and the Forefathers, it would appear their guitarist Allan Crockford has another group putting out music also, enter The Galileo 7. This four piece from the UK plays their own take on Psychedelic/Garage Rock, but with more than a little Pop sensibility. I don't think it's a stretch to say that if they were around in the 60's, they would of become one of those timeless names that everyone still praises to this day, some 50 years later. If you can't manage to find the vocals catchy, you're going to find something that gets stuck in your head, be it the riffs, melodies, the whole thing is catchier than herpes.
From the first moments of the opening track, "Don't Follow Me", you're greeted with a sound that could pass as an auditory hallucination, which is faded out by the addition of a fuzzy riff, and those Pop coated vocals, with the rest of the group dropping in piece by piece shortly after. The electric organ is always an instrument that I thought was pretty cool, and this group uses it to perfection, not having to hide it in the back of the mix, or lay it on top as an afterthought, it's weaved in seamlessly amongst the other instruments, not just on this track, but all of them. The fourth track, "False Memory Lane" sounds like it could pass as a long lost song from The Beatles'  "Magical Mystery Tour" at times, with that classic sort of British Psychedelic vibe that was prevalent at the time, but still managing to do their own thing and let the Garage Rock habits show through just a bit here and there. The next song "Nobody Told You" is the exact same way, except it would seem to fit more readily on "Sgt. Pepper's Lonely Hearts Club Band" during certain parts, but that harder edge definitely shines through on this one, with the loud and blistering guitar riffs that comes in during the middle of the song, perforating the Pop sounding foundation that's laid out so well by the keyboard.
This group takes a sound that has been replicated so many times, and by the best of 'em, yet still manage to put their own stamp on it, so even though the music seems to draw on the best tunes of those bygone days, it's unquestionably theirs at the same time. If you call yourself a fan of classic Psychedelic Rock, 60's Pop music, or Garage Rock you're going to get hooked on this album in someway. And right now, when you order the vinyl from their store, you get a 3 track EP to go along with it, two releases for one price is always cool.
~Skip