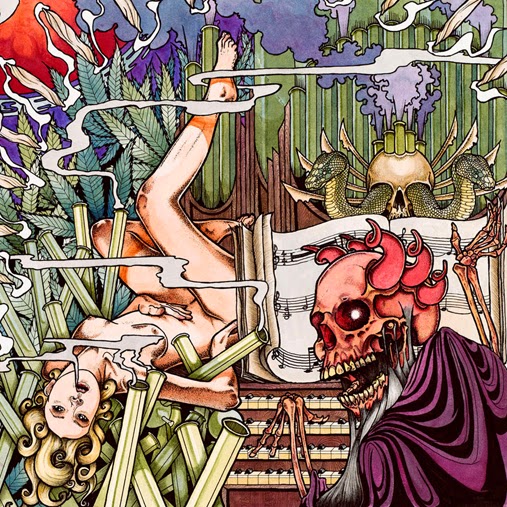 The latest album from Poland's own Dopelord is a very solid offering of occult doom with some love of '70s ephemera swirled in alongside the mighty riffs and mega-heavy grooves. More than solid, the album packs a high amount of content that will sound familiar to those acquainted with what the band refers to as 'magical herbs', though clearly imprinted with the band's own sense of things. They find a more-than-happy medium between the blueprints of Black Sabbath and the more aggressive edge of modern fuzz-and-film-samples storms from groups like Electric Wizard and Dopethrone, then dive in head-first, kicking up splashes of psychedelic doom with enough black-light energy infused to make your speakers start to glow.
As the album goes on, things start getting a bit more sinister, with the middle track, “Acid Trippin'”, serving as the catalyst for things to start going into unbridled madness. The second-to-last track, “Green Plague”, sinks deeper and deeper into psychedelic cascades of guitar-tone feedback reverbing into and over itself, with loops squealing and cycling in and out of existence. Finally, it comes down to “Pass The Bong”, the longest track on the album, which measures in at a knee-wobbling 11-and-a-half minutes, but makes use of every last second in that run to make the most of turning the wildness up even higher.
As the band's second album, it's extremely impressive; they've got their feet planted firmly where they want them, and a strong personality shaping the various influences from which they draw. Don't miss out on hearing this one, as you'll be seeing it in plenty of '2014 Album Of The Year' lists in the months to come. Just get yourself a copy, kick back, and let the weed cult take you away.
~ Gabriel