The Sound of HEAVYDEATH Approaching 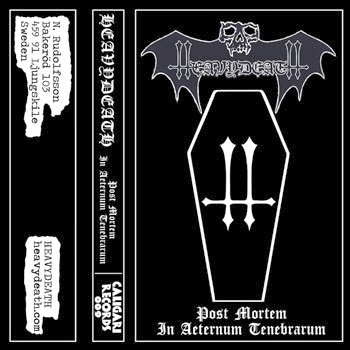 This Death/Doom Metal duo from Sweden play a spaced out sort of Death/Doom Metal, spaced out but still fucking crushing. This is their first demo, it's four songs coming in at around twenty-three minutes, put out on cassette through Caligari Records. This may be the group's first demo, but the musicians are seasoned, having been in bands like Runemagick, Necrocurse, and The Funeral Orchestra. Slowly building up from the start, it turns into a two ton slab of granite, being dragged along, and obliterating everything it comes across. With the droning on of the opening sequence, the drums slowly build into a death march rhythm, and the massive guitar riff adds an extra dose of heaviness to the formula. The standout track on this one, for me, was "Into the Heavy Death". With the skull crushing opening Doom Metal riff, and quaking bass lines that develop, all three instruments come together to create a dense wall of sound, one that you can feel in your chest when played at appropriate levels. This lends to the feeling of devastation that the band puts out in their music. The vocals come in after a time, but almost sounding like a chant, but begin to turn into the guttural screams you've come to expect from any genre with Death Metal influence. You can pick up their first demo on cassette over at the Caligari Records Store, and check out the rest of their demos over on their own bandcamp.
~Skip
For Fans Of; Winter, (early) Paradise Lost, Hooded Menace