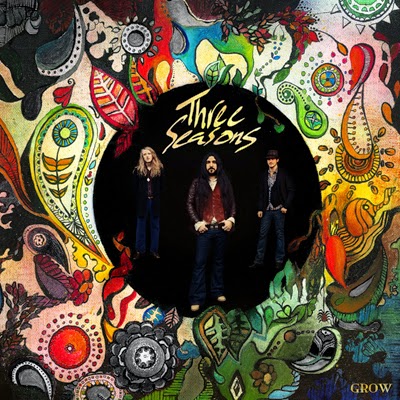 Three Seasons is a band to further support the theory that the water in Sweden is tainted with very good drugs. Coming off the success of their widely acclaimed first two albums, they are set to release "Grow" on May 14th on Transubstans Records. The 8 track album consists of songs that are from a bygone time period, but that same time period's music seems to soldier on and thrive. This is classic, timeless Psychedelic Rock, just like it's the 60's and 70's all over again, maybe some stuff was just a little better back then? But, they're not just another cookie cutter type of retro band, they do manage to put their own stamp on the sound.
The second track "Drowning" is probably my favorite of the album, with a nice, fuzzy riff and a slightly heavier sound than most of the other tracks, and the soaring, melodic vocals sit so perfectly on top, it's an unbeatable combination. The electric organ throughout the entire track really solidfies that vintage sound the band is known for, and really seems to fill out the song nicely. Another one of the tracks that I really dug was "Home Is Waiting", a straight up Blues song, with just a touch of that Classic Rock sound, with the electric organ keeping in perfect time with the guitar wailing out that classic riff. Those same dynamic type of vocals are present on every track, but really shined for me on this one.
You can head on over to Record Heaven and pre-order the CD, then you'll be the first kid on your block with the new Three Seasons album, which is set to be come a top album of the year, and deservedly so.
~Skip
For Fans Of; Dead Meadow, Cream, Led Zeppelin