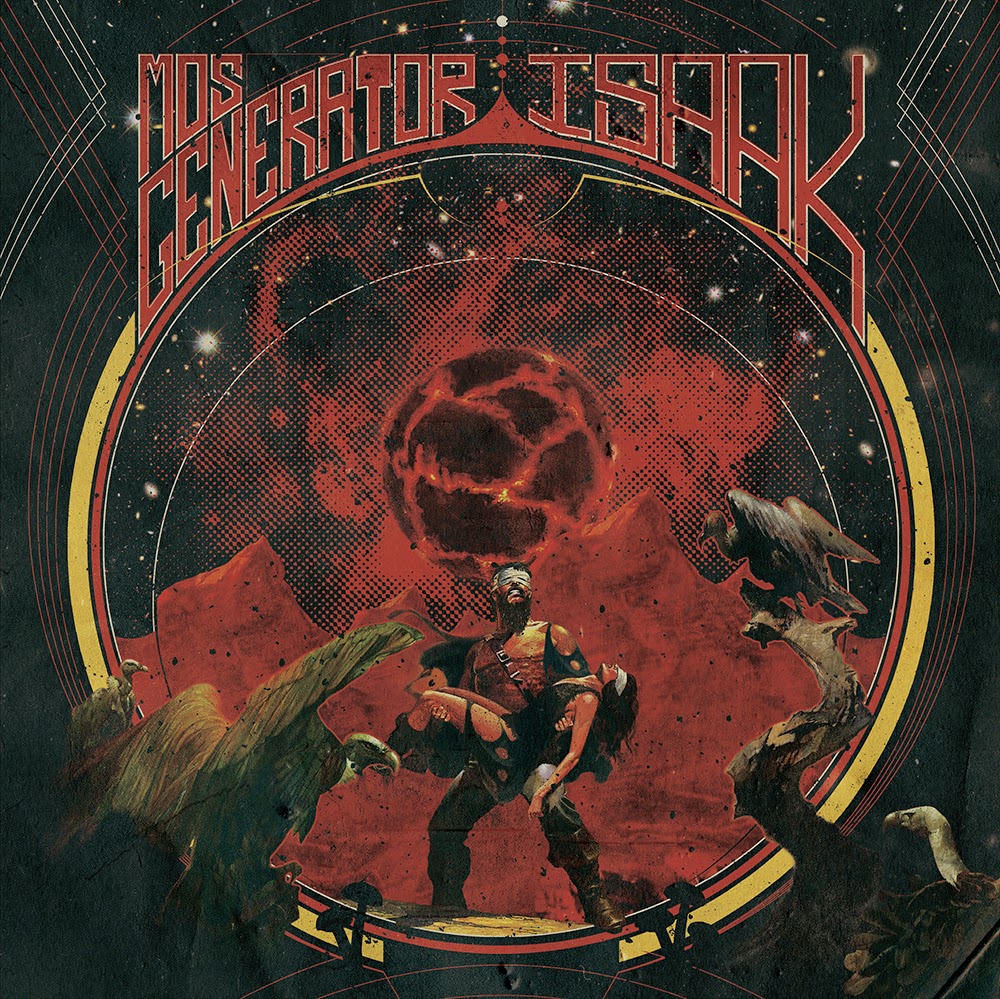 If you're following this blog, chances are that you're already a fan of heavy music and aren't new to hearing about either of these bands. American made Mos Generator have been turning out their own type of spacey, tripped out Heavy Rock for a while now. Matching them with the hard hitting Italian act Isaak is one of those face palm inducing moments where you think to yourself "Of Course!".
The way it was presented to me, Side A was the Mos Generator side, so we're going to address it first. Opening with a few heavily distorted guitar notes and a rather eerie keyboard part, it all fades away to be replaced with what could pass as a galactic radar noise searching for intelligent life somewhere, the kind that it seems like you can feel your heart rate and brain waves sync up to. From there, the harmonic noise ends and the right hand of Heavy Rock lands a hay maker to the gut, the harmonic vocals like a cruel taunt against the back drop of bludgeoning drums. With a roaring guitar solo, and quick jam session the song could end and feel complete, but we all know that's not their style, instead everything drops off and you're left with a slow, and quiet passage where the vocals make another appearance, further adding to the Pink Floyd vibe this section of the track has. And at twelve minutes in length, there's plenty of track to work with, and lots of room to roam. Isaak's offering on this album builds up from a single monotone hum, slowly building through cymbals, a melodic guitar part, and a Jim Jones sample before launching into a heavy Stoner Rock trip. The riff slams the track into high gear and everything else is forced to keep up. The visceral heaviness of the band's tirade is offset by the harmonica part that gives the song an expansive sound, like being crushed by a mountain as opposed to a simple boulder. While song takes a quiet turn, with things slowing down a bit, it's only temporary. Think of it as sonic waterboarding, the crushing sections suffocate you and simulate drowning, but they'll let you breathe again...for a minute. They're guaranteed to go through the process a couple more times, with the breathing sections becoming shorter and shorter, luckily this seems much more enjoyable than being on the wrong end of that bucket.
While the album isn't out for public consumption yet, it won't be long. Being put out on Heavy Psych Sounds, you can get your preorder in for vinyls over on their website, with a choice of standard black, or black with red marbling. You'll also be able to pick up a digital version on the same page once the 14th of the month rolls around in a little over a week, but we'll be sure to remind you, as this one is far too good to miss.
~Skip


For Fans Of; Wo Fat, Black Sabbath, Across Tundras