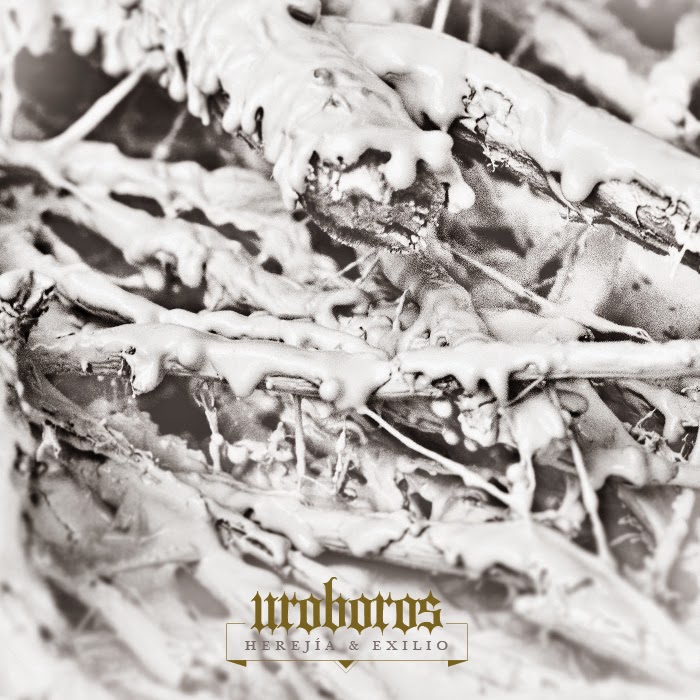 Last week, we delved into Uroboros' EP Misantropía & Blasfemia, and now we continue on into their second EP.  Herejía & Exilio begins with “K'Zulu”; whether that's a reference to Cthulhu or not is up to the listener's discretion, but it's a great starter track, beginning with a barrage of sound before slowing down a little into a mean sludge groove.  After some dirty thrash slips in, it's on to “Arcano Devorador”, which makes more use of the vocalist's ability to deliver loud, growling menace over a chunky riff that verges on death metal at times.
“Holocausto” follows, taking the prize for longest track on the EP at ~10 minutes as with "En Las Fauces de Uroboros" on the prior EP, and similarly making use of its expanded run-time to show off the band's skills in a variety of stylistic capacities.  From the slow, near-drone beginning into harder, faster sludge, a few dirge-like bridges from the drums and guitar, a tasty feedback stretch or two, and an atomic explosion (accompanied by sirens and a sample of Robert Oppenheimer) mid-way through the track, “Holocausto” is incredibly diverse, to the point of almost feeling like it could be its own EP.
While they could have cut off there and had a strong release, Uroboros takes the time to give Herejía & Exilio a proper closing track in the form of “Somos El Pueblo De Dios”, a much slower and somber piece which comes as a nice breather after the final high-speed assault of “Holocausto”.   It brings to life the wintry scene from the cover art, making excellent use of a wind instrument alongside the precise strumming of an acoustic guitar for a sound so chilly it'll bring goosebumps to your arms.
It's a strong EP, either solo or taken with Misantropía & Blasfemia, and between the two of them, the band has made an impressive debut for themselves.   It will be fascinating to hear how the Argentinian duo tops themselves once they're ready to release a full-length LP, but until then, fans of sludge and experimental metal can do themselves a favor by familiarizing themselves with what the band has already made available.
~ Gabriel